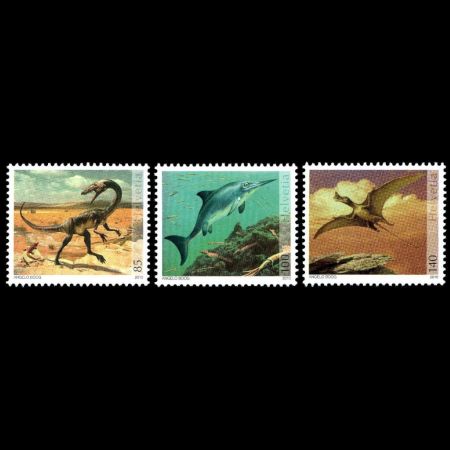 Numerous skeleton and footprint finds confirm what a lot of people do not know: many millions of years ago, there were dinosaurs in Switzerland too. Reptiles which are now extinct (saurians) lived not just on terra firma, but also in the water and in the air. Three new special stamps showcase a selection of Swiss saurians, bringing them back to life: Theropoda , Ichthyosauria, Pterosauria. Skelets of all three dinosaurus found at Switzerland: Theropoda and Ichthyosauria at Frick, Pterosauria at Kanton Graubuenden and can be seen at Sauriermuseum Frick
All three Dinosaurs are depicting on the stamps are lived at Switzerland in Trias period (220-65 M. years ago). The stamps are based on real founds of some fossils in Switzerland:
A skeleton of Theropoda, depicting on stamp of 5.10CHF, found in Frick on 2006, ad was the first Predator Dinosaur found in Switzerland.A skull fossil of Ichtyousaria, depcited on stamp of 6 CHF, is also found in Frick. Some fossils of Pterosauria are found in Kanton Graubuenden. Fossils of Theropoda and Ichtyousaria can be seen at Sauriermuseum in Frick.
These stamps are represent an accurate (as much possible for nowadays) of dinosaurs and their living environment. 3D models are cretaed for each dinosaur based on existed fossils.
These stamps are cancelled (CTO) and signed by an Illustrator Angelo Boog at Sauriermuseum in Frick on 03.09.2010. First Day Covers(FDC) where sold there by Switzeland post on the same day at the museum hall and could be post from there to any distination. These stamps and FDC are might be still on sale at the museum online-store