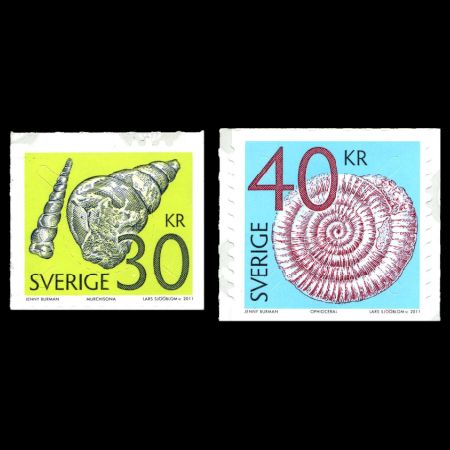 Sweden's bedrock consists primarily of extremely old rock that was formed deep down in the Earth's crust or rock that has been transformed and therefore does not have any fossils. Scattered on top of this bedrock are stratifications of younger types of rock that contain the remains of earlier forms of life. In the oldest sections of these rock formations it is possible to find everything from mysterious trace fossils in 500 million year old sandstone to woodlouse-like trilobites or the cone-shaped shells of mollusks, which are often found in limestone steps and are close to 470 million years old. Fossils of the inhabitants of and around Gotland's coral reef are probably the most commonly found and they have been pocketed by many a Swede during a visit to the island. These reefs were formed in warm oceans during the Silurian period 420 million years ago when continental drift placed Sweden close to the equator. It is in this environmentyou will find the fossils depicting in the stamps. Murchisonia was a relative of the mollusk family and had a long, conical, spiral shell. It lived at the bottom of the ocean between the reefs and fed off the seabed. Ophioceras swam just above the seabed and was a shelled mollusk. It was an active hunter and most likely fed on other free-swimming animals. 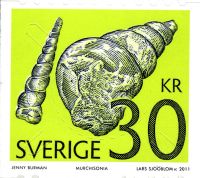 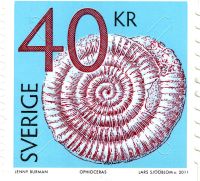 Both of the fossils are several centimeters in size. In the most southern tip in Sweden there are also younger types of rock that contain not only fossils of cycad and other primitive plants but also footprints of dinosaurs and the legs of large marine reptiles such as the Plesiosaurus and Mosasaurus. The ocean was also home to several types of sharks, the teeth of which today are iust as sharp as they were 70 million years ago.
As an extra security measure, Sweden Post's logo is embedded as a microtext in these two stamps. The number of private individuals selling items to one another online is growing and there is a clear need for more convenient postage alternatives. The two new stamps with denominations of SEK 30 and SEK 40 are one way for Sweden Post to meet the growing demands from the e-trade industry.