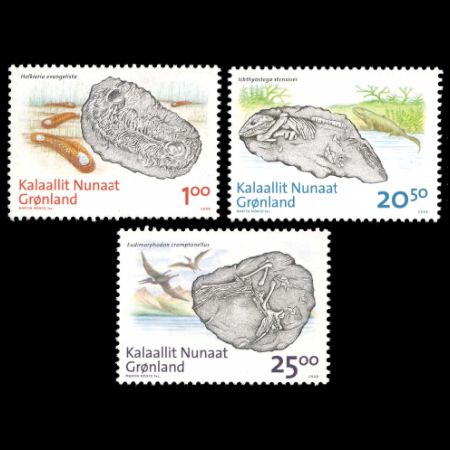 A new series of a total of six stamps with greenlandic fossils is now brought to light. The illustrations and the engravings are made by the Norwegian Martin Mrck. The frst three stamps of the series are issued on 24th May, and the remaining three in 2009.

The geology of Greenland has a remarkable large number of rock structures that stretches over almost four billion years of history of the Earth. In fact, sedimentary deposits from Isua in West Greenland reveal the earliest proof of known life, in the shape of micro-organisms, existing 3,8 billion years ago. Life developed later in species and numbers and left its marks on geological history. Rocks and fossils in Greenland have given us an insight into the development of animals and plants throughout the history of the Earth. The frst series of stamps on this subject illustrates important events in life on Earth by showing unique fossils from Greenland. In the geological Age, Cambrium, a riot of different species arose, which later lead to the inhabitation of the earth and the sky by toads and pterodactyls respectively.