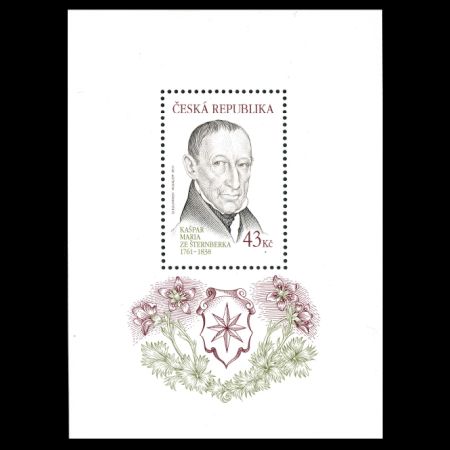 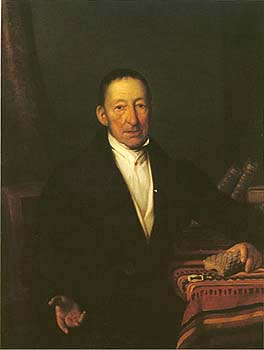 Kaspar Maria von Sternberg (born on January 6th, 1761 at Březina Castle) was one of the leading scientists of the first half of the 19th century, with a special interest in botany, geology and paleontology, and is considered as one of the founders of paleobotany. He is the author of an extensive and precious collection of minerals, fossils and herbs that became the core collection of the National Museum in Prague, founded by Kaspar Maria von Sternberg. Kaspar Maria was born the eighth and last child (third son) of Johann von Sternberg and Anna Josefa Krakovská of Kolovraty, into a not wealthy Czech aristocratic family of Sternbergs. A philosophy graduate from the Prague University, he studied theology in Rome and received lower ordination. Inspired by the newly founded Regensburg Botanical Society (1790), he became a keen naturalist, contributor to the Society's Botanisches Taschenbuch and one of its ordinary members (1800). His first private botany teacher was Charles Jeunet Duval. After his failure as a church diplomat to Paris (1804-05), he gave up his career in the church and moved to Regensburg to work as director of local scientific institutes. The Regensburg Botanical Garden, set up by Sternberg, was destroyed during a 1809 war campaign.
During his French stay, Sternberg was introduced to Alexander von Humboldt and a group of elite French paleontologists and botanists. His book, A Survey of Saxifrages in Pictures (published in Latin) was based on materials collected during his scientific trips, especially to the Bavarian Alps. Shortly after the publication, he inherited the West Bohemian Radnice estate from his older brother and devoted scientist Joachim. He set up a botanical garden in Radnice and was a frequent visitor to the newly opened coal mines in the neighboorhood where he searched for primordial plant fossils. After his A Treatise on Botany in Bohemia (originally published in German and soon after also in Czech), he (together with Karel Bořivoj Presl and Augustin Corda) co-authored the 1820-38 An Attempt at Geographical and Botanical Description of Primordial Plants. He also became one of the key shareholders in Prague Railway Company (1825) authorised to build the Prague-Lány Horse-Drawn Railway (1827).
Kaspar Maria von Sternberg was elected President of the Society for the Establishment of the Czech National Museum in 1818, and bequeathed his library and paleontological collection to the museum. He died at Březnice Castle on December 20th, 1838 as the last male heir of the Leopoldine branch of the Sternberg family. [R1] 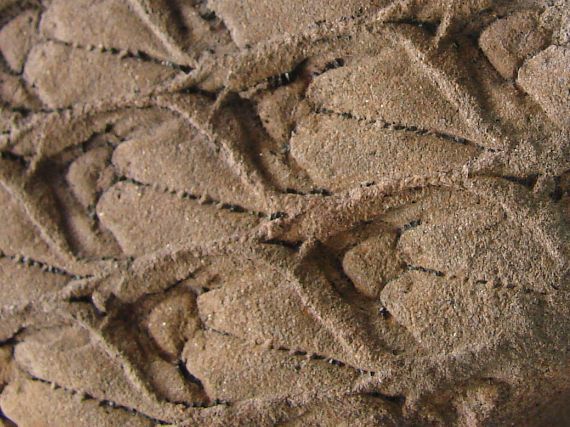 Illustration of First Day Cover(FDC) shows a piece of trunk of Lepidodendron .

Lepidodendron — also known as the scale trees — is an extinct genus of primitive, vascular, tree-like plants related to the lycopsids (club mosses). They were part of the coal forest flora. They sometimes reached heights of over 30 metres, and the trunks were often over 1 m in diameter.
It was tree-like, branching at the top and with a trunk covered with leaf scars.
They thrived during the Carboniferous Period (about 359.2 ± 2.5 Mya (million years ago) and were found until the Late Triassic, about 205 Ma) before going extinct.
Lepidodendron was named and described by Kaspar Maria von Sternberg. His description of Lepidodendron came from his deep studies of the fossils associated with coal mines in Bohemia. [R2]