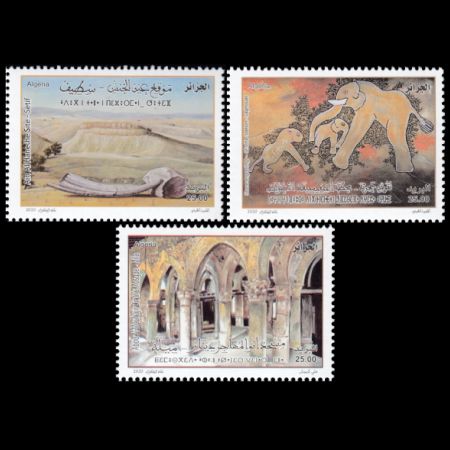 On January  15th, 2020 Post Authority of Algeria  issued a set of 3 commemorative stamps that  shows three unique archaeological sites of the country.
One of them shows a petrified wood and fossilized tusk of prehistoric elephant, that roamed at the area of Ain Al Hanesh over 2 millions years ago.
Another stamp shows  adult and babe elephant attacked by a tiger from a cave painting at  Sfissifa Station. 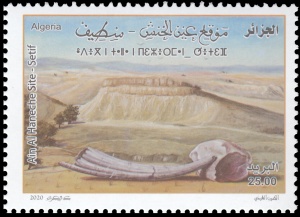 Archeologists have discovered lithic tools and animal bones on the site of Ain Al Hanesh, dating from 2.4 million years ago. The site is situated at the municipality of GueltaZerka, district of El Eulma, in the wilaya of Setif, 35 km from the chief town of the wilaya.
The site witnessed numerous studies from 1931 to 1937.
By 1947, the French paleontologist Camile Arambourg resumed these studies and was able to prove the existence of a Plio-pleistocene deposit, in addition to his classification of these fossilized bones (elephants, equids, cows, hippopotamus, rhinos, ...), as well as cut pebbles constituting Oldowan sub-spheroidal and spheroidal polyhedrons that Lionel Balout called "The Spherical Round Utensils", what makes this discovery the first of its kind regarding very old archaeological remains found next to fossilized bones of Savana animals.
By the beginning of the nineties, various annual researches and scientific excavations were programmed in order to decipher this site's mysteries and distinguish the link between it and hominids. In this spirit, a group of researchers led by the quaternary researcher and prehistorian Dr. Mohamed Sahnouni, launched their study of Lithic tools exhibited at the Musee de l'Homme of Paris, which were brought from the excavation of Camille Arambourg. These tools were compared to the Lithic tools discovered in Ain Al Hanech and those belonging to the site of Olduvai in Tanzania (East Africa).
Scientists consider this site of Olduvai to be the world's most ancient archaeological site prehistory, where discovered  fossilized remains of Homo Habilis, why it was dubbed "The Cradle of Humanity".  The discovery gave the site of Ain Al Hanech a major importance concerning the migration of hominoids from Africa to Europe and the early colonization of North Africa. That's why it's considered to be a key for future studies of the prehistoric era. 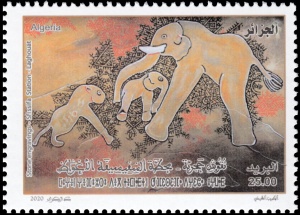 Primitive humans have always shown an interest in their natural environment, which they benefited from and used in their daily life, captured and illustrated  through drawings and engravings, they put on the rocky surfaces around them and  which we can see nowadays in different sites all over the country.
One of these  sites being the Sfissifa Station, is located in the municipality od Al Ghicha at Laghouat,  and contains a diverse heritage including both a Neolithic rocky art and touristic  landscapes attracting visitors.
The station is located on the roadside, South of Al Ghicha municipality, and 10km away from its chief town. It holds one open facade taking the shape of a damaged rocky formation that weathered hazards have already devastated , and which is entirely exposed to the sun. Regarding this facade's dimensions, it has a length of 31,5m and a height of 7m, illustrating numerous animals: an elephant, a tiger, a baby elephant with an adult one, two ostriches, a donkey , a bull and a snake. The archaeological value of this site raised due to the worldwide fame of its drawings, like the one picturing a female elephant protecting her calf, and which was chosen as the emblem of the United Nations International Children's Emergency Funs (UNICEF).
The drawing portrays a baby elephant in motion walking to the left side, protected by his mother. Put in the center of the facade and engraved in a thick and deep line, this drawing of 1.07m length and 1.85m wide is well preserved.