Neanderthals fossils and cave painting on stamps of Iran

Contents:
Iran, officially the Islamic Republic of Iran. Known as Persia until 1935, Iran became an Islamic republic in 1979 after the ruling monarchy was overthrown and Shah Mohammad Reza PAHLAVI was forced into exile.
Conservative clerical forces led by Ayatollah Ruhollah KHOMEINI established a theocratic system of government with ultimate political authority vested in a learned religious scholar referred to commonly as the Supreme Leader who, according to the constitution, is accountable only to the Assembly of Experts. The country with more than 83 million inhabitants located in Western Asia and bordered by Armenia, Azerbaijan, Turkmenistan, Afghanistan, Pakistan, Persian Gulf and the Gulf of Oman, Turkey and Iraq.
Tehran is the capital and largest city, as well as the leading economic and cultural hub.
Iran is home to one of the world's oldest civilizations, beginning with the formation of the Elamite kingdoms in the fourth millennium BC.
According to some fossils found in the country, it is suggested that Neanderthals were roaming the Iranian Zagros Mountain sometimes between 40 to 70 thousand years ago. [R1]

The first stamps of Iran issued in 1868 - set of four imperforated stamps with Steamship images.
To date (2020) there are no official stamps of Iran that relate to paleontological and paleoanthropological sciences.
Some personalized stamps with fossils and cave painting of Neanderthals were issued by the National Museum of Teheran in 2019 - the only stamps of the country to consider. [R2]


[1] The National Museum of Teheran issued a set with a number of personalized stamps showing artefacts of their huge collection in 2019. Three stamps are related to the stone age. The stamps themselves are ornamental tablets, with big personalized tabs attached to it. The tabs are: 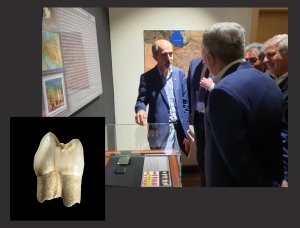 Neanderthal tooth found at Wezmeh cave by a team led by Fereidoun Biglari in 1999.
Fereidoun Biglari is the co-founder and head of the Paleolithic Department in the National Museum of Iran which was established in 2001. The tooth is pictured on one of the stamps in the set and until recently was thought to be from a modern human. A collaboration between scientists from the Iran National Museum, the University of Poiters, and the University of Bordeaux confirmed that the tooth was actually from a neanderthal child.

This is the ﬁrst direct evidence of the Neanderthal presence in the Iranian Zagros.
Jebrael Nokandeh, director of the Iran National Museum said the results of this new study that was published in the international "Journal of Human Evolution" definitely prove that Neanderthals lived in the Zagros region.

The Wezmeh Cave is an archaeological site near Islamabad Gharb, western Iran, around 470 km southwest of the capital Tehran. Since its discovery in 1999 several excavations were done at this site.
The only Natural History Museum in Iran is Zagros Paleolithic Museum Kermanshah, established by Fereidoun Biglari and A. Moradi Bisetouni in 2008. The museum contains a large collection of stone tools and animal fossil bones from various Paleolithic sites in Iran.
Zagros Paleolithic Museum occupies four rooms which include objects from various Paleolithic and Neolithic sites in Iran, dating from ca. 1,000,000 years to some 8,000 years ago. [R3]