Since 2018, I have been summitting the "Paleophilatelie" website to international competitions in the Electronic-Literature category.


I aim to popularize the topic, especially young philatelists and improve quality of my website.

Current Awards collection of Paleophilatelie website is:
However, after participating in several international philatelic website competitions, I have to say that the competitions are mishandling the exhibition of websites during the actual conferences.
The only way for visitors to know that this category of exhibition exists at the conferences is to read the lists of competing websites in the program.

The cost of a digital media presentation participating is approximately the same as the fee for a one-frame physical exhibit.
One-frame exhibits are clearly displayed on site – but digital media are invisible because there is no way for attendees to see the websites (no computer screens, notebooks, or other electronic displays showing the competing websites).
In case there is no room for computers or lack of public internet, it can be possible to add a frame per website with synopsis and some printed screen shots with QR Codes to allow the visitors to get the first impression, then visit it on their mobile devices such as smartphone or tablets.

I feel strongly that this is discriminating against digital media.
I hope it will change in the future and digital exhibits will be treated more like traditional show displays. 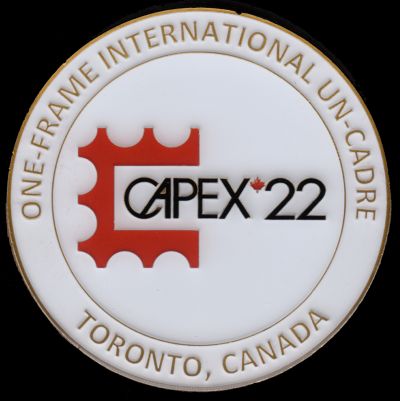 Capex 2022 International One Frame Stamp Championship Exhibition was held at the Metro Toronto Convention Centre (MTCC) in the heart of Toronto’s downtown entertainment district. With more than 400 frames CAPEX 22 was the largest show of one frame exhibition ever. The show was organized by the Philatelic Specialists Society of Canada under the patronage of the Federation Interamericana de Filatelia (FIAF) and with the recognition of Fédération Internationale de Philatélie (FIP).
The exhibition also included an array of printed and digital philatelic literature, including philatelic websites.

According to the organizers, computers with internet connections were available at the Literature viewing area where attendees could view any publications entered as pdf or other digital media. All websites without paid or restricted access were also available for viewing.
This might be the first international expo where such digital literature facilities were offered! 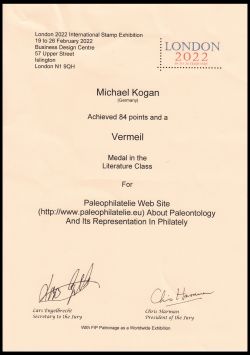 In February 2022 "Paleophilatelie" website was awarded a Vermeil medal on competition of philatelic websites at London 2022 philatelic show.
The show has been organized by Stamp World Exhibitions Ltd. on behalf of the Association of British Philatelic Societies. The exhibition was held under the patronaged of the Fédération Internationale de Philatélie (FIP), who recognized it as a Worldwide Exhibition and the recognition of the Federation of European Philatelic Associations (FEPA).
The show was planed for 2020 first, but postponed due to Covid.

The exhibition was huge - over 600 competitive exhibits occupied over 3,000 frames and almost 350 exhibits participated in the Literature competition (printed and electronic combined).

To my big disappointment, the score split and feedback from the jury were not provided. Really pity, as the score itself doesn't allow to draw any conclusion how to improve the website for the next competition.


By sorting the literature exhibits (https://www.london2022.co/literature/) per score I made some interesting observations:

In September 2021 "Paleophilatelie" website was awarded a GOLD medal, with score 10 of 10 points, on competition of philatelic websites at FILANANIAS 2021 virtual philatelic show in Brazil that took place between 06 July 2021 to 31 August 2021.
The show was organized with support of Brazilian Philateliec Association FILABRAS (Associação dos Filatelistas Brasileiros).
The main objective of FILANNIAS 2021 was to promote Philately via the Internet, encourage and train new philatelists, being a fraternization between philatelists and the general public, with a didactic and cultural nature.
The exhibition contained 142 participants from 18 countries, with 239 exhibitions, among collections in 3 categories/classes: general collections, philatelic literature and websites.
According to organizers, over 45,000 people accessed the virtual show. 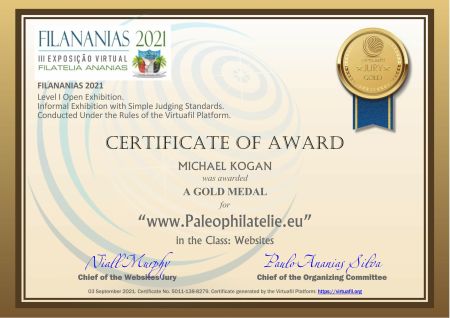 The jury feedback:
"This is simply one of the very best philatelic websites out there.
The statement on the site is "the most comprehensive catalog about Paleontology and Paleoanthropology in Philately" and I believe this is quite correct.
The amount of information available seems almost limitless and the philatelic knowledge on show is of the highest level, where each issue is studied in minute detail.
There seems to be no aspect of this theme that has been left unexplored.
I was particularity impressed with the section that talks about undesirable stamp issue from various African countries.
This is an area rarely mentioned in philately.

Criticisms:
Difficult to find anything to criticize here. It's a labour of many years devotion.
The site might look a little more modern if the standard Times New Roman was replaced with something a little more "modern".
Otherwise...this is a major philatelic resource for this theme of Paleontology and Paleoanthropology." 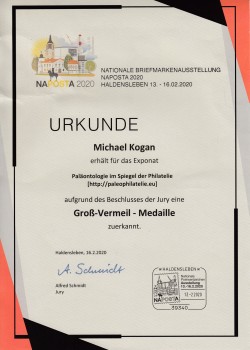 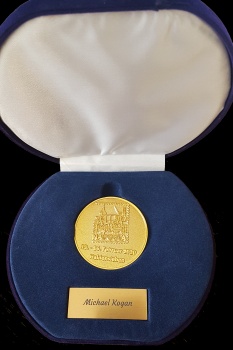 The national postage stamp exhibitions have a long tradition in the Federal German Republic. It usually take place every five years. However, the last NAPOSTA took place together with the IBRA in 2009 in Essen.
The Federation of German Philatelists was hereby entrusted the Association of Stamp Friends of Haldensleben and the surrounding area, which celebrated its 100th anniversary in 2020.
Over 800 frames occupied by traditional philatelic exhibits, for whom it was the last chance to be qualified for IBRA 2021 World Stamp Exhibition that should take place next year in Essen.


"www.Paleophilatelie.eu" website awarded by Large Vermeil Medal with score of 80 points out of 100.


Unfortunately, no feedback provided by the jury that make it difficult to draw a conclusion how to improve this website to get a better score in the future.
Similar to all other Philatelic Competition where "Paleophilatelie" website have been attended, the only way for visitors to know this category exists, is to read the names in the list of participants as no monitors or Internet corner have been installed in the room. 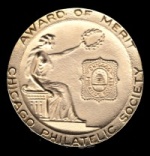 In November 2019 "Paleophilatelie" website participated in philatelic websites competition at philatelic literature class at CHICAGOPEX 2019 stamps show, that took place between November 22-24 at Westin Chicago Northwest Hotel in Illinois, USA.
The show organized by the oldest and very famous philatelic club of USA - Chicago Philatelic Society. CHICAGOPEX is one of the oldest philatelic shows in the world and opened its doors for 133rd time this year.
It counts to the one of the most prestigious philatelic events in USA, when jury applies the very high standards and have very high expectations from every participant.
Distinguished from many other philatelic shows participation was open for everybody no membership in any club or society or points from any previous shows were required from participants.

Unfortunately, similar to all previous shows where this website has participated, digital exhibits were invisible for a wide public.
It was mention in the brochure with participants list only. No monitors or Internet cafe installed there to allow visitors to go on-line and inspect websites that took place in the competition.


"www.Paleophilatelie.eu" website awarded by Large Vermeil Medal with score of 81 points out of 100 in the Literature category, where printed and digital media compete one with other, perhaps because only 4 websites participated in the competition.

This is the 3rd Large Vermeil medal of this website and the second from USA based philatelic shows.


In September 2019 "Paleophilatelie" website participated in philatelic websites competition at philatelic literature class at BELPHILA 2019, Belarus, the 10th National Philatelic Exhibition, that took place between 4-8 September and celebrated the millennium anniversary of Brest.
The BelPhila 2019 exhibition has been organized by the Belarusian Communications and Information Ministry, the Belpochta postal service, the Brest City Hall, and the Belarusian Union of Philatelists with participation of the Culture Ministry, the Information Ministry, and the National Art Museum.

The main aim of the 10th National Philatelic Exhibition is to attract attention to philately in Belarus. 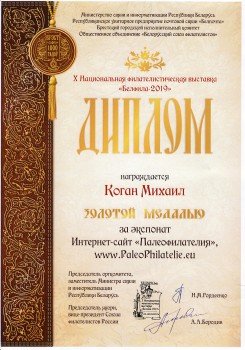 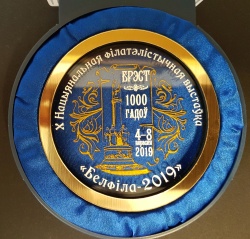 "www.Paleophilatelie.eu" website awarded by Gold Medal with 96 points out of 100.
This is the first Gold medal and the highest score won by this website!

The package received from the stamps show includes not only the Certificate and the Medal, but also many philatelic souvenirs: commemorative postal stationery, two booklets with mint commemorative Blocks "1000 years since the first written reference of Brest" which issued in limited quantity of 2000 only and a book "Postage stamps of Republic Belarus: 2017" with all mint stamps and blocks issued in the country during the year, as well as a brochure from the stamp show with list of all participators. It is very generous gifts, especially due the fact that there are was no participation fees.
The only missing thing is the feedback from jury. Distinguished from other philatelic exhibits the Gold medal is the best prize of the show. (Large Gold medal is not available.)


In August 2019 "Paleophilateie" website participated in philatelic websites competition at philatelic literature class at " National Topical Stamp Show" organized by American Philatelic Society in cooperation with American Topical Association, that took place in Omaha, Nebraska, USA between 1-4 August.
This is a very large and very popular annual event among North American philatelist with over 800 exhibition frames. 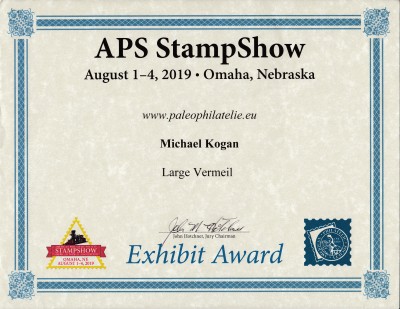 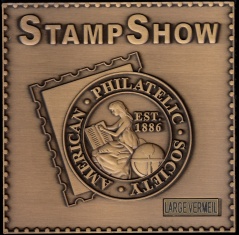 "www.Paleophilatelie.eu" website awarded by Large Vermeil Medal in "Electronic" Literature sub-category with score of 83 points out of 100.

Due the fact that synopsis of the website not forwarded by the show organizers to the jury, some of juries comments was irrelevant. Other comments, especially about "Treatment" section was useful and lead to redesign of home page and several other main pages of the website.

It was a pleasure and good experience to participate the show and I was happy to get some comments of the jury, but was disappointed by the fact that most of the visitors weren't aware about website competition as no screens nor monitors installed there to provide visitors a possibility to visit it. The only place where visitors was able to get information about participated website is a brochure with list of all participators and addresses of websites.
"The Participation of PWO Members in the APS Stamp Show 2019" article contains my interview and comments of other participator of the show. 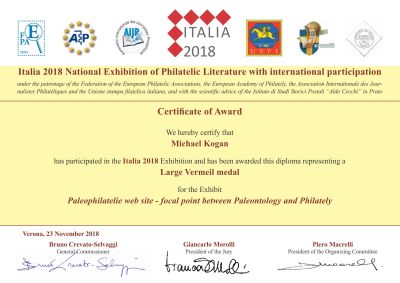 In November 2018 "Paleophilateie" website participated in "ITALIA 2018" Exhibition of Philatelic Literature, that took place in Verona, Italy, between 23-25 November 2018 (initially planed to be in Milan in March 2018) .
The Philatelic Literature Exhibition Italia 2018 is a specialized national exhibition with international participation, organized by the Federazione fra le Società Filateliche Italiane (Fsfi) under the patronage of the Federation of the European Philatelic Associations (Fepa). Italia 2018 has been granted the patronage of the European Academy of Philately (Aep), the Association Internationale des Journalistes Philatéliques (Aijp) and the Unione stampa filatelica italiana (Usfi), and the scientific advice of the Istituto di Studi Storici Postali “Aldo Cecchi” in Prato.
Over 30 philatelic websites participated in the competition. All awards, except Grand Prix presented in the form of digital diplomas (.pdf files).

"www.Paleophilatelie.eu" website awarded by Large Vermeil Medal with score of 81 points out of 100.

Unfortunately, jury provided the score split only, without any feedback or comments. Really pity as the score itself doesn't allow to draw any conclusion how to improve a website for next competition. I also have a doubt if anybody except the jury was aware about the websites competition and visited it during or right after the show. According to a fellow collector who visited the show, no screen or monitors installed there to allow visitors to see participated websites.


The next competitions where Paleophilatelie.eu will participate