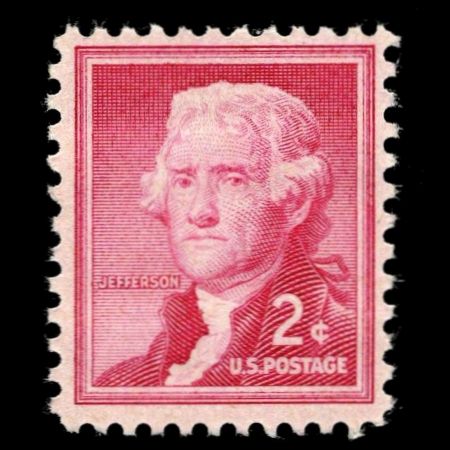 If you were a guest at Thomas Jefferson's home at Monticello, you could see things that revealed the intellectual range of this remarkable Founding Father. The house, designed by Jefferson himself, was perhaps the most beautiful building in the new republic and inside it was the nation's greatest library. Throughout the building's public spaces you would see images and statues of major politicians and philosophers. And in the entry hall more a museum than anything else you could examine a variety of natural history and ethnographic specimens, including some from the Lewis and Clark Expedition. Among these displays were fossils of an impressive giant, the American mastodon.
mastodon tooth

Jefferson is rightfully renowned as the principal author of the Declaration of Independence, the Third President of the United States, and a champion of Liberty. But he was also a central player in the beginnings of American paleontology. In addition, his participation occurred at a time when people were struggling with the ideas of fossils as evidence of past life, of extinction, and of an Earth far older than the Biblical account.

Some of the fruits of Jefferson's paleontology became part of the collections at the American Philosophical Society in Philadelphia. Beginning in 1849 these holdings were transferred over to the Academy of Natural Sciences of Philadelphia, where they are currently housed. This is the Thomas Jefferson Fossil Collection.

In March of 1797, Jefferson arrived in Philadelphia to attend the inauguration of John Adams as president and himself as vice president. However, his heart and mind may very well been more invested in a talk he would soon give at the American Philosophical Society. He had just been elected president of the society and almost certainly preferred the company of its members to the cabinet of his political rival, Mr. Adams .

The subject of Jefferson' s talk before the society was a collection of remarkable bones he received from a cave in what is now West Virginia. The bones were discovered while workmen were mining saltpeter (sodium nitrate) from the cave floor. Many of the bones had been taken by locals as souvenirs, but a few of them were salvaged by John Stewart and sent to his friend at Monticello.

At the talk on March 10, Jefferson described the bones, which consisted of a fragment of the upper arm, the two bones of the lower arm and parts of the hand. Menacing claws at the end of each finger, prompting Jefferson to name the animal "Megalonyx" or "Great-Claw". He concluded that these fossils belonged to a large cat such as a lion or tiger. But they were too large to belong to any known cat. Using the anatomical account of the African lion by the French anatomist Daubenton for comparison, Jefferson estimated that the Megalonyx weighed more than three times the weight of the lion. He concluded:

"Let us say then, what we may safely say, that he was more than three times as large as the lion: that he stood as pre-eminently at the head of the column of clawed animals as the mammoth stood at that of the elephant, rhinoceros and hippopotamus: and than he may have been as formidable an antagonist to the mammoth as the lion to the elephant."

An unexpected thing happened to Jefferson before he was to present the talk on Megalonyx (=Great Claw). He had been browsing a Philadelphia bookstore when he chanced upon an article in the British publication Monthly Magazine. It contained a short abstract and illustration based on a 1796 publication by Georges Cuvier on a giant, clawed fossil from Paraguay. The fossil, which was essentially a complete skeleton, belonged to an unknown animal that was clearly related to the South American tree sloths. Cuvier had named this creature Megatherium.

Confronted with the possibility that his "lion" may in fact be a relative of the sloth, Jefferson hastily appended a postscript to his talk. He acknowledged that Megalonyx could, in fact, be Megatherium . On the other hand, Jefferson was skeptical that the two were identical. He remarked that the magazine article's illustration "is not so done as to be relied on, and the account is only an abstract". Moreover, he commented, "having nothing of our animal but the leg and foot bones, we have few points for a comparison between them." Jefferson acknowledged that the limb bones resembled each other but he still reserved judgment. After all, Cuvier's identification of Megatherium as a relative of the sloth was based primarily on its teeth. Jefferson concluded: "But to solve satisfactorily the question of identity, the discovery of fore-teeth, or of a jaw bone shewing it had, or had not, such teeth, must be waited for, and hoped with patience. I may be better in the mean time, to keep up the difference of name."

More details about Megalonyx and Thomas Jefferson contribution to Paleontology can be found on The Academy of Natural Sciences of Drexel University web site.

References: The Academy of Natural Sciences of Drexel University