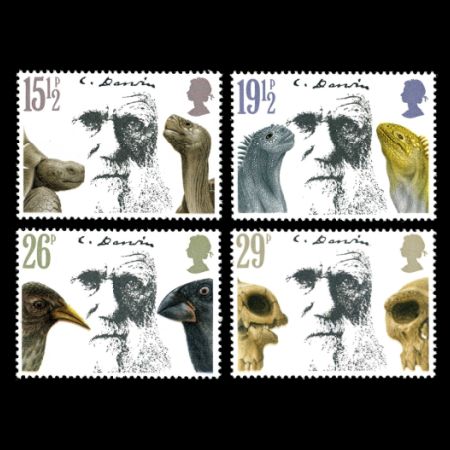 Charles Darwin was born in 1809 and died in 1882. In his long life he produced several books and wrote thousands of letters commenting on many aspects of biology and geology. Although Darwin was an eager and active explorer in his youth, riding, climbing, walking and collecting his way round the world at the invitation of Captain Robert Fitz Roy of the survey ship H. M. S. Beagle (1831-1836)-another aspect of him is portrayed at the end of his long and often stormy career. It is that of the venerable and bearded scientist whose once revolutionary ideas had been accepted finally by his contemporaries. Darwin kept notes and observations on the natural history and geology of the countries he visited and on his return he immediately started notebooks on the "transmutation of species". He recorded that he had been deeply impressed by three things during the Beagles voyage; the similarities between fossil remains and recent animals in South America, the geographical distribution of animals in that continent, and the productions of the Galapagos Islands more especially by the manner in which they differ on each island of the group' The Galapagos Islands are a group of volcanic islands in the Pacifc Ocean on the equator and 600 miles west of Ecuador. The land animals and plants which were able to colonize the islands have developed in isolation into new species, not only different from the nearby continent, but showing differences between the various islands. 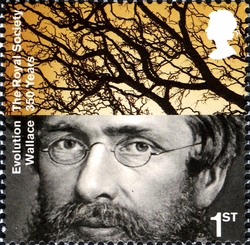 Darwin devoted years of study to collecting information about the problem of species, and in thinking about explanations and mechanisms for the transmutation of species which he felt sure had taken place, and was taking place. While gathering material for his giant book Natural Selection; a letter from Alfred Wallace who had similar ideas, precipitated him into producingan abstract of his ideas published in 1859 and now known as the Origin of Species!' That book with its detailed evidence and strongly argued case for gradual change and adaptation in animals and plants had a profound effect not only on biology but also in many other areas of thought and activity where change and adaptation became issues.
Darwin, as Britain's greatest biologist, should be remembered not only for his Theory of Evolution (a word he rarely used) but also for the outstanding contribution he made to geology, soil science, the study of animal behaviour, and experimental botany.

References: Wikipedia BFDC Inside pages of FDC and Presentation Pack