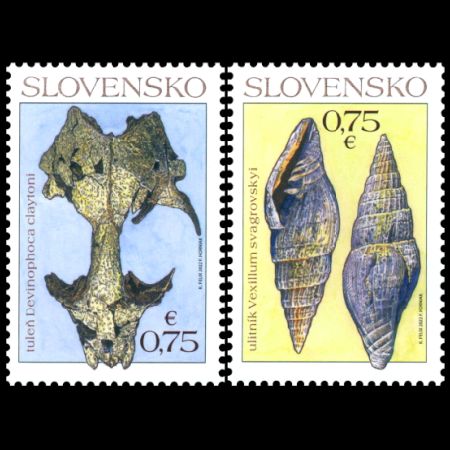 On September 9th, 2022, the Post Authority of Slovakia issued the set of two stamps "Important Fossils from Slovakia".
The Postal Philatelic Service (POFIS) decided to display an exceptional find on a postage stamp with a nominal value of €0.75, based on a proposal from the Institute of Earth Sciences of the Slovakian Academy of Science (SAS), after discussion and approval by the Stamp Commission.
The stamps set presentation occurred on September 9, 2022 at the Slovak National Museum (SNM) - Museum of the Culture of Croats in Slovakia, in Devínská Nová Ves.
(Devínska Nová Ves also known by its Hungarian and German names Dévényújfalu and Neudorf an der March is one of most famous paleontological sites in Slovakia.)
In addition to representatives of the organizers from the Slovak Post, the Slovak Philatelists' Union, museums, the Devínska Nová Ves district, philatelic clubs, the Institute of Earth Sciences of the Slovak Republic, the Lesser Karpaty Geopark and the Paleoclub, the small ceremony was attended by those who were behind the discovery of the seal skull - the discoverer Štefan Meszároš and co-author of the expert description of the location and the find - emeritus Professor Peter Holec from the Faculty of Natural Sciences, Charles University.
The official description of the set was written by Dr. Radoslav Biskupic independent researcher, Poprad (Slovakia).

One of the postage stamps depicts the fossil of the holotype of the skull of Devinophoca claytoni which is be found in the collection of the Museum of Natural History of the Slovak National Museum (SNM) in Bratislava.

Devinophoca claytoni, whose unique fossilised remnants were discovered at Bonanza.
The fossils of this genus and species of seal shows that it had specific morphological features which makes it stand-out from other groups of seals.
Thus, Devinophoca claytoni was included into the newly described subfamily Devinophocinae.
The genus and family names were coined from the name of the nearby borough of Devínska Nová Ves and the Latin name for the seal (phoca). It is very important from an evolutionary point of view as it represents a primitive group of seals, found at Devínska Kobyla, that is considered to be the predecessors of all the seals that live today.
This precious species was only endemic to Bonanza, where it lived in the shallow marine paleo-environment with the zones of coral reefs near the former coast of Devínska Kobyla, on the eastern edge of this Tertiary sea, the Central Paratethys.
The morphology of the skull revealed that the species Devinophoca claytoni ate molluscs and crustaceans.
The holotype seal skull fossil is kept in the collections of the Slovak National Museum - Natural History Museum in Bratislava and is one of the rarest paleontological collection items.


The Devínská Kobyla massif in the southern part of the Lesser Carpathians is one of the most important paleontological regions, not only in Slovakia, but also in Europe and, in some respects, in the world. A large number of paleontological sites makes this place unique.
The period of the younger Tertiary, Baden and Sarmatian, approximately 13.5-10 million years ago, is particularly significant.
In the younger Tertiary (Miocene) Devínska Kobyla was a dry land with a peninsular to island ecosystem.
Based on the found fossil communities, it can be assumed that about 13 million years ago, this area was dominated by a subtropical forest-humid habitat with fresh water sources and rare open areas.
The coast included rocky cliffs and sandy beaches washed by a warm shallow sea that was inhabited by a wide range of marine fauna.
In addition to the well-known Sandberg, important paleontological sites also include Bonanza, which is located on the northern edge of Devínská Kobyla, between Dúbravka and Devínská Nova Vsa.
The site is represented by a crack in the Mesozoic limestones, which is filled with marine sediments of the younger Tertiary - Miocene. Findings of a rare fauna of fossil marine and terrestrial vertebrates were described from the site.

Another stamp shows gastropod Vexillum svagrovskyi is a precious endemic species that has only been found in the paleontological site at Konopiská pri Rohožníku.
The species was named in honour of Professor Jozef Švagrovský (1921-1985), an important Slovak geologist, paleontologist and university teacher.
Its discovery supplements and updates our knowledge of the diversity of fossil molluscs that lived in the Neogene Sea of Paratethys.
Included within the clay sediments was a specific population of gastropods among which common, rare, and previously undescribed species were identified.
One of the newly described species of molluscs from the site was a predatory thermophilic marine gastropod from the family Costellariidae – Vexillum svagrovskyi. The species was named in honour of prof. Jozef Švagrovský (1921–1985), an outstanding Slovak geologist, palaeontologist and university teacher.
A similar species, Vexillum neudorfensis, was discovered in the borough of Devínska Nová Ves. It differs from the former with transverse ribs and spiral grooves that are evenly developed on all whorls, plus five columellar folds.

Approximately 13 million years ago, populations of Vexillum svagrovskyi lived in marine paleo-environments of the deep sub-littoral zones with a soft muddy seabed.
The species had adapted to the unfavourable environmental conditions that were characterised by a reduced flow of water and a low oxygen concentration near the seabed.
The postage stamp depicts a holotype that is deposited, together with other examples, in the collection of the Museum of Natural History of the Slovak National Museum in Bratislava. 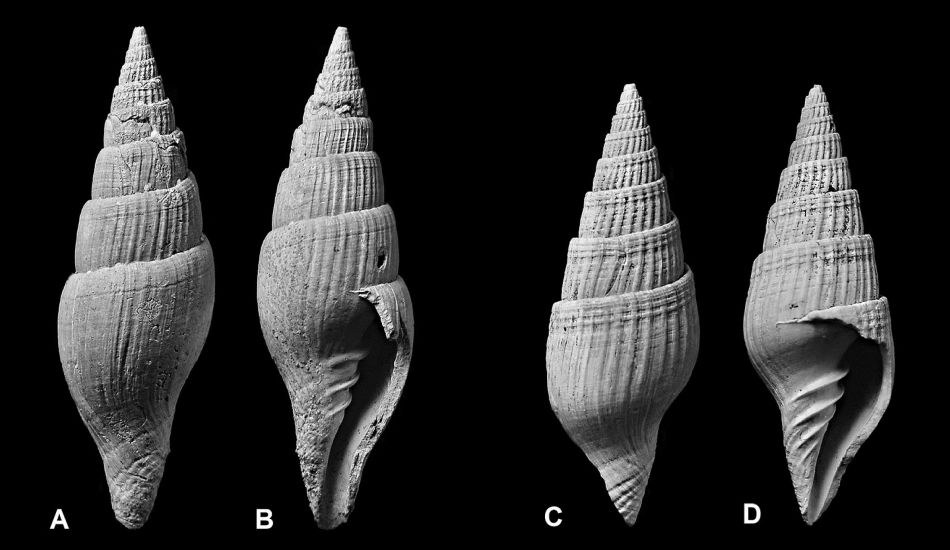 Konopiská pri Rohožníku is one of the major Slovak paleontological sites, that includes finds of fossilised marine fauna from the Tertiary Period.

[Note: Tertiary Period is an obsolete term. It has been split into two periods - the Paleogene and Neogene. Looking up the site - it appears to date to the Miocene Epoch. The Miocene Epoch is a portion of the Neogene Period.]

The site, a former clay extraction pit and the close by surrounding area, is situated east of the municipality of Rohožník which can be found on the eastern edge of the Záhorská nížina lowland.
Various types of marine clay, sand, arenaceous clay and algal marls that contained a wide range of fossilised marine fauna (invertebrates and vertebrates) were discovered in the clay pit.
These animals come from the younger Tertiary Period – the Miocene, when approximately 13 million years ago, sedimentation took place in the shallow and deep marine environments on the eastern edge of the Vienna Basin, which at that time was one of the bays of the Central Paratethys.

Four additional prehistoric animals are shown on the cachets and postmarks of FDC.


The postmark of Bratislava from the FDC with Devinophoca claytoni stamp shows prehistoric toad Bufo priscus.
With a body length of about 8 cm, it belonged to a medium-sized species of toad. The skeleton of the Bufo priscus toad was found in the 1980s by an amateur paleontologist Štefan Meszároš.
While exploring the quarry of the former Štokeravská limestone on Devínská Kobyla, he discovered a fissure in the limestone of the quarry, which he called "Bonanza" due to the richness of the fossils of marine and terrestrial fossils he discovered there.
Later, in the years 1996-1998, paleontological research was carried out on the site. The fissure was filled mainly with marine sandy sediments from the younger Tertiary period, more precisely the upper Baden (about 14 million years ago), when the sea from the south, from the Pannonian basin, penetrated further north and flooded the slopes of Devínsky Kobyla. Numerous fossil skeletal remains of about 37 species of marine and terrestrial vertebrates were found in the sediments.
The remains of terrestrial animals were floated into the fissure from the surrounding land. The fossil is stored in the collection fund of the SNM - Natural History Museum in Bratislava.

The cachet of the same FDC shows the skull of a primitive middle Miocene (Badenian) primate, Epipliopithecus vindobonensis, discovered at the paleontological locality "Zapfe's fissure" (Stockerau quarry) near Devínska Nová Ves fissure in western Slovakia, by Austrian paleontologist Helmuth Zapfe (1913-1996).
Major portions of three individuals are preserved, including a well-preserved skull, associated limb bones, vertebrae, scapulae and an ilium, which indicated extreme primitiveness.
Today, these fossils are part of collection of the Natural History Museum in Vienna (Naturhistorische Museum, Vienna). These fossils have some resemblances to gibbons bones.
These fossils were described by Zapfe and Hürzeler (paleontologist from Switzerland) in 1957.
It was originally named as a subgenus of Pliopithecus (Pliopithecus vindobonensis), but later on, based on more detailed analysis of its teeth, it was recognized as a separate genus from Pliopithecus.
Epipliopithecus vindobonensis is an extinct species of pliopithecoid primate (superfamily of catarrhine primates that inhabited Asia and Europe during the Miocene).
Epipliopithecus is one of the few pliopithecoids for which both cranial and post-cranial fossil material has been recovered.
Most pliopithecoids are known only from fossilized teeth, whereas Epipliopithecus is known from three nearly complete skeletons.
As such, Epipliopithecus has greatly informed the modern understanding of pliopithecoid anatomy, locomotion, and phylogeny.
Epipliopithecus vindobonensis had comparatively long hands and feet, and long, curved fingers, and was mostly likely an agile climber.

The postmark of Rohožník from the FDC with Vexillum svagrovskyi stamp shows a shell of foraminifera.
A foraminiferan - a single-celled, microfossil.
Foraminifera appeared at the beginning of the Cambrian periood, but remained small in size for the next 200 million years.
Some of them superficially looked like ammonoids with a coiled shell - but since this is a Miocene-aged site, an ammonoid would be a poor choice of fossil to show since they had died out some 50 million years beforehand.

The cachet of the same FDC shows a scleractinian coral of the species Solenastrea desmoulinsi originated from the middle Miocene (Badenian) marine deposits exposed at the site near Dubová (Danube Basin, Slovakia).
A similar coral species Heliastrea reussiana was found at Devínska Nová Ves, the place where fossil of the seal Devinophoca claytoni was discovered.