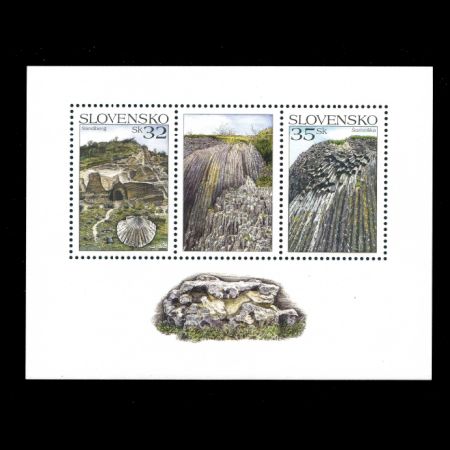 In April 2006 Post authority of Slovakia (Slovenská pošta) issued an Mini-Sheet with two stamps and a tab in the middle, shows some unique geological localities of Slovakia: Sandberg and Somoska.
The range of geological processes over different geological eras resulted in the formation of a wide range of rocks in Slovakia. The mutual action of often opposing phenomena (such as accumulation/removal and redistribution of rock masses, alternation of sea and land) due to climatic changes resulted in many unique natural formations, many of which are now legally protected. 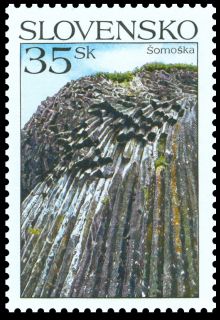 One of the most remarkable geological areas is the theme of this Slovak postage stamp. It is world-renown for its 300 types of fossil: Sandberg (– from the German ‘sand hill’). It is situated in the National Nature Reservation of Devínska Kobyla, in the municipality of Devínska Nová Ves, in the southwest margin of Bratislava. From the geological point of view, this area is in the transient sector between the Alps and the Carpathians. The wider zone around Sandberg was formed by the sediments of the warm (subtropical) tertiary sea that intruded into this region about 15 million years ago. Littoral and beach sediments with horizontally settled layers are characteristic. The layers are formed mainly of fine-grained sands and gravels, with compacted sandstone in the upper banks. The layers of lithotamnian carbonates are also interesting. The sands were largely excavated in the past. The shells of foraminifers, slugs, shellfish, and even shark teeth and the bones of large mammals form the majority of fossils. Fractions of pectens, for example the Flabelipecten solarium (Lamarc) that is reproduced on the stamp, are amongst the most common. The slug Panopea menardi is reproduced on FDC. The fossils of larger animals (e.g. vertebra of a whale, seals, turtles) have also been unearthed. This site has been proclaimed by the international geologic community as a standard locality for the substage “devín”, i.e. the upper part of Badenian. In terms of flora and fauna, many species of protected plants (e.g. iris, pheasant’s-eye, etc.) flourish in this area, and in the sand walls many protected species of birds – including the honey-buzzard and sand-martin – build their nests. 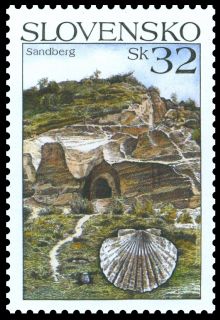 The second stamp shows "stone waterfall" of Somoska - despite its relatively small area, is characterised by a very diverse and complicated geological structure. Endogenous and exogenous processes continually repeating and alternating with each other have determined - during their intricate evolution - the variability of the rock. The important part of the endogenous processes is volcanic activity, the result of which is the birth of volcanoes that have produced a wide spectrum of volcanic rocks. Under the influence of changes of climatic factors (temperature, wind, precipitation), the exogenous processes cause the weathering of rock surface layers, and transport the products of such erosion with water and air onto the places of their repeated accumulation and subsequent building up of new sedimentary rocks. Under the influence of just the above-mentioned phenomena, many unique natural formations have emerged in Slovakia. One such formation, �the stone basalt waterfall� at castle hill �omo�ka, is reproduced on both a Slovak postage stamp and FDC. This formation represents the selectively preserved part of basalt lava intake canal (neku) with distinctive mildly bent columnar jointing. �omo�ka is situated in Cerov� upland, the municipality of �iatoro�sk� Bukovinka (post office Radzovce), near the Slovak-Hungary border. It is a national nature reserve with an area of about 90 acres, and with a nature trail passing through it. Sea sediments (mostly sandstones) prevail in the lower parts of the geologic structure Cerov� upland which evidences the former presence of a sea bay. Volcanic activity is represented by less frequent older andesites (15.5 to 16.5 million years) � in the vicinity of �iatoro�sk� Bukovinka. But younger basalts (5 to 1.2 million years) prevail, forming peaks and extended crests in the west part of upland. The territory of Cerov� upland is an outstanding phenomenon of both inanimate and animated nature summarily written up in the popular scientific work �Geological educational map of Cerov� upland in scale 1 : 50 000 (RNDr. M. Elecko, CSc et al.)�. This was published by the Dion�z �t�r National Geological Institute in cooperation with the Ministry of Environment of the Slovak Republic in 2001. RNDr. Karol Marsina, CSc