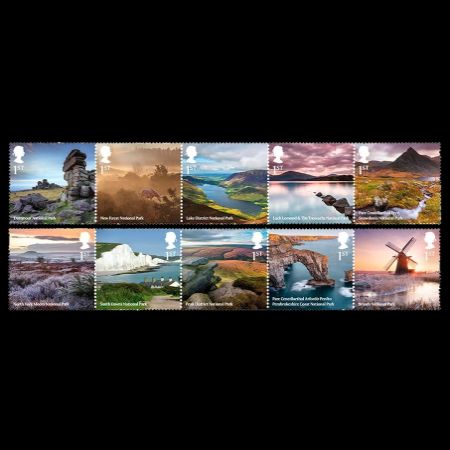 The set of 10 stamps, printed in two horizontal se-tenant strips, with images selected in collaboration with the National Parks, commemorates the 70th anniversary of the opening of the first of the UK’s 15 National Parks. 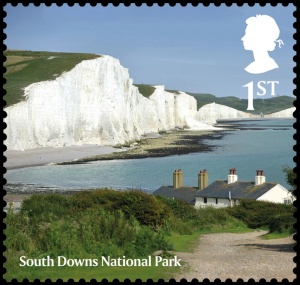 The South Downs National Park forms a large area that includes the chalk range of the South Downs and large parts of the Weald.
The South Downs are a range of chalk hills that extends for about 670 km2 across the south-eastern coastal counties of England from the Itchen Valley of Hampshire in the west to Beachy Head, in the Eastbourne Downland Estate, East Sussex, in the east.
The South Downs are characterised by rolling chalk downland with close-cropped turf and dry valleys, and are recognised as one of the most important chalk landscapes in England. The range is one of the four main areas of chalk downland in southern England.


The South Downs are formed from a thick band of chalk which was deposited during the Cretaceous Period between 75 and 90 million years ago this part of the country was under a shallow tropical sea. Chalk muds were laid down at the bottom of this sea and were very thick and widespread.

The rock is composed of the microscopic skeletons of plankton which lived in the sea, hence its colour. The chalk has many fossils, and bands of flint occur throughout the formation. The Chalk is divided into the Lower, Middle and Upper Chalk, a thin band of cream-coloured nodular chalk known as the Melbourn Rock marking the boundary between the Lower and Middle units.

Fossils of marine prehistoric animals such as ammonites, echinoids and molluscs can be found at coastline at the foot of the South Downs National Park.
One of the most famous English paleontologists of the XIX century, Gideon Mantell (1790-1852) made some research at the region, then published his results in a book "The fossils of the South Downs : or, Illustrations of the geology of Sussex", printed in London in 1822 and contains several nice illustration of the marine fossils, made by Mary Ann Mantell.

Mary Ann Mantell (1795–1869) was a wife of Gideon Mantel.
She is credited with the discovery of the first fossils of the dinosaur Iguanodon. Mary Ann Mantell drew up 364 fine lithographs of the fossils, that were then used in her husband's scientific publication "The Fossils of the South Downs" and in "Illustrations of the Geology of Sussex" published in 1827, in which Gideon Mantell describes the Iguanodon.

References:
Acknowledgements:
Many thanks to