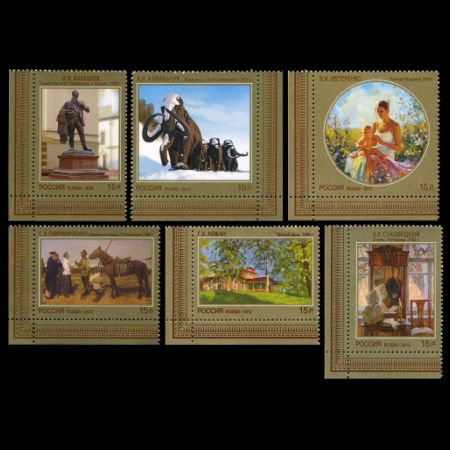 On 30 July 2012 Russian post issued 6 stamps, continuing series of "Modern Art of Russia". The series was begun in 2011. These stamps shows some pictutes and monuments created by modern Russian artists. Among them is a stamp depicting Monument "Mammoth" in Khanty-Mansiysk made by A.N. Kovalchukin 2007.


On September 9, 2007 Khanty-Mansiysk became another landmark, while the citizens have a new rest area. In honor of the 425th anniversary of the capital of Ugra - sculpture of "Mammoths". Now it is supplemented with figures of primitive humans and other animals, evolved into a unique park Ice Age then grow up to "Archeopark" with many other figure of prehistoric animals and early humans.

All sculptures are made according to modern scientific knowledge with advice of local paleontologists and represent an animals lived in the region, which fossils can be seen in local musem "Nature and Man"