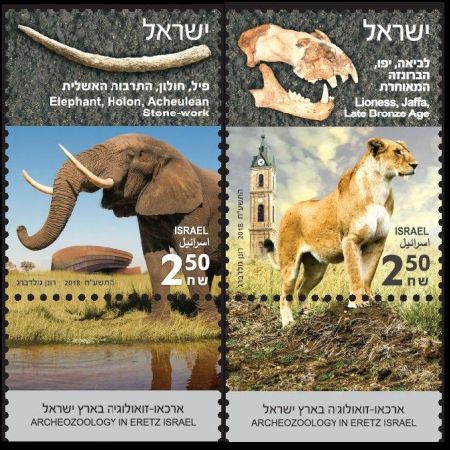 On August 28, 2018 Post of Israel issued as et of two stamps "Archeozoology in Eretz Israel"
The term archeozoology, the scientific field that studies animal bones found in archeological excavations, is composed of three Greek words. Archeo – ancient, Zoo – animals and Ology – field of study. In other words, the study of ancient animals. A number of unique findings have been made in excavations in Eretz Israel, including: the bones of a Syrian bear in Tel Hadid dating from the Iron Age (Israelite) (930-586 BCE). The location and period are reminiscent of the biblical story of the prophet Elisha and the bears in Kings II; the bones of a hippopotamus found at Tel Qasile (Napoleon Hill) on the banks of the Yarkon River (10th century BCE) between Tel Aviv and Ramat Gan. The remains of an ancient hippopotamus from the Pottery Neolithic Period (5500-4500 BCE) were also discovered in the Ramat Aviv area of Tel Aviv. The Israel Philatelic Service previously issued a stamp featuring a dinosaur whose fossilized footprints were discovered on the banks of the Tethys Sea, on a kibbutz near Jerusalem.