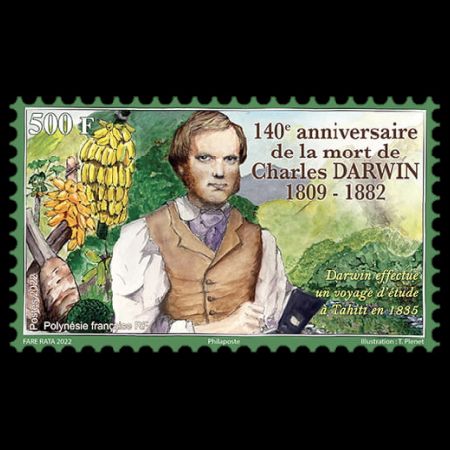 Charles Darwin was born on February 12, 1809 in Shrewsbury and died on April 19, 1882 in Downe, England.
This English naturalist and paleontologist, whose work revolutionized notions about the evolution of species on earth through natural selection, was famous for his book “Origin of species” published in 1859.
Darwin’s theory demonstrates that all species evolve and adapt to its environment in order to survive. His theory was a profound reversal of scientific, philosophical and even religious thought on the very nature of the human species.
Most of his work was based on observation and study during the five-year expedition aboard the ship the HMS Beagle (1831-1836).
A voyage around the world during which Darwin made, methodically, a large number of observations, collected all kinds of living or fossilized species and scrupulously noted each discovery, often unknown until then.
Darwin quickly established a solid reputation among scientists. His findings, which are richly described and analyzed, demonstrate the merits of his work.

His travel memoir, originally for his family, was published in 1839 under the title “The voyage of the Beagle”.
This book describes each stage of his adventure and provides multiple observations in all fields such as biology, geology, sociology, anthropology as well on nature, as on the populations encountered.
This journey began with the crossing of the Atlantic Ocean and then along the coasts of South America, passing the Strait of Magellan towards the Pacific Ocean (the Galapagos Islands, French Polynesia, New Zealand, Australia, Tasmania) then the Indian Ocean (Cocos Islands, Maldives, Mauritius) Cape Town, then return by Brazil to England.
Arrived in Tahiti on November 15, 1835, the HMS Beagle moored in the bay of Matavai. Immediately, Darwin noticed the beauty of our coasts and the warm welcome of the Tahitians. The next day, accompanied by Tahitian guides, he went to discover the interior of the island in the valley of Tuā'uru in the commune of Mahina. During his ascent, he will note every detail of the luxuriance of the flora but also the ingenuity and symbiosis of the Polynesian in his environment.
Moreover, when he arrived at the summit he discovered in the distance, the island of Moorea and its reef that will give him the idea of the theory of the volcanic origin of the atolls.

Fare Rata, the Polynesia Post Office is honored to commemorate this scientist who changed our vision of the world and whose passage in Polynesia will remain in our memories.