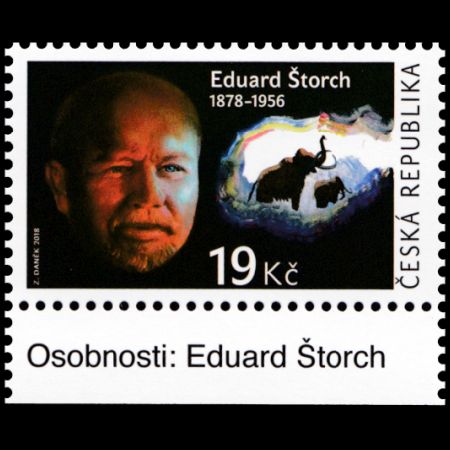 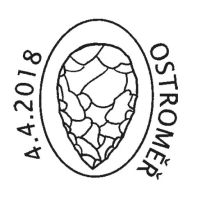 On April 4, 2018 Post Authority of Czech Republic issued a stamp to commemorate birthday of Eduard Storch with pair of mammoth on a background.
The stamp portrays Eduard Štorch illuminated by the light of the fire in a prehistoric cave and an imaginary view from the cave with an outlined prehistoric mammoth. The primary motif of the first day cover is a mammoth. The handstamp uses the motif of a wedge-shaped hammerstone. Eduard Štorch was born in Ostromer u Horic on 10 April 1878. He graduated from the grammar school and teacher’s college in Hradec Králové. He taught at many schools in eastern and northern Bohemia (Most region). He conducted paedagogical research and published the results in the Nová doba magazine. From 1903 to the retirement in 1938, he lived in Prague but was long denied the final appointment as a civil servant for political reasons. After the post- World War I appointment as a school inspector in Bratislava in 1919-1921, he returned back to Prague. Štorch was a very versatile man. As a teacher, he tried to combine education with outdoor activities, such as a camp for children and parents on Prague’s Libenský island. He also gave swimming and skating lessons, led a scout troop, organised and led many ski courses for teachers and children. Štorch was a keen archaeologist. He gained the necessary knowledge by selfstudy and later by his own archaeological research and practical experience. He conducted most of his archaelogical surveys in Prague and around Lobec in the Melník region. He was also a writer, educator and journalist. Eduard Štorch died in Prague on 25 June 1959.