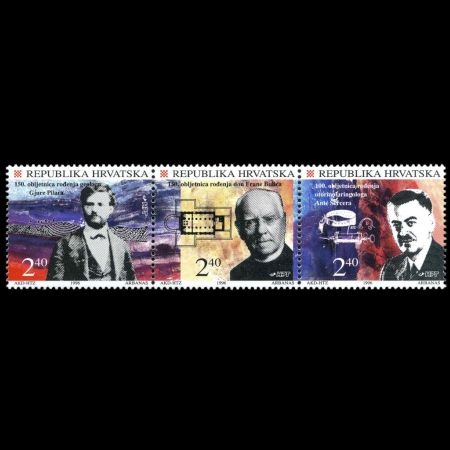 The stamps are issued in blocks of 12. Croatian Post and Telecommunications sells the First Day Cover FDC and the First Day Sheet. 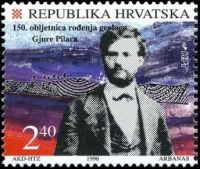 Gjuro Pilar was born in Slavonski Brod in 1846. After completing his education at grammar school in Osijek and Zagreb he studied natural sciences in Brussels, where he also received his doctoral degree at the age of 22. He published numerous geological scientific papers, quite outstanding at the time, which have, for decades, served as starting points for further fundamental and practical reserches of Croatia and western Bosnia. He was engaged in many geological disciplines: paleontology, mineralogy, petrology, coal deposits, geodynamics, hydrogeology of Karst. He was also engaged in studies regarding mining, mining law, geodesy, astronomy, meteorology and archeology. He also participated in the founding of the Croatian national science association, the Croatia mountaineering association and, in 1885/6, together with some friends, he founded and registered the first chess club in Zagreb; he also organized a "trial tournament", the first modern Croatian chess tournament based on the model of European chess contests. 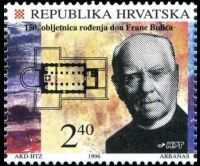 Ante Sercer was born in Slavonska Pozega in 1896. He attended grammar school in Dubrovnik and completed his medical studies in Graz and Prague. He specialized otolaryngology in Zagreb and later in Prague and Vienna. He started working at the Otolaryngologic clinical hospital of the Medical faculty in Zagreb in 1920. Later he became its administrator and soon also associate professor. In 1946. he became head of the department of the otolaryngological department of the Sisters of Mercy Hospital. Owing to his reputation the department was given the status of the otolaryngological clinical hospital of the Medical faculty in 1964. Sercer published 170 scientific papers, among which outstanding places belong to his works in the field of otolaryngological propaedeutics and clinical treatment, plastic surgery of the nose and ear, oral surgery and tonsilar problems. He experimentally tested and proved that the nose is not simply a passive tube serving for the passage of air, but an active and complex respiratory organ. His method of presenting the infrastructure of the nose through decortication attracted great attention abroad. He was among the first in Europe to treat otosclerosis by surgery and he also worked out a special theory about the etiopathogenesis of this illness. 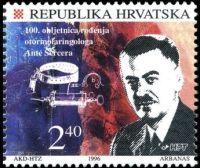 Frane Bulic was born in Vranjic near Split in 1846. He studied theology in Zadar, was ordained as priest in 1869 and in the same year started the study of classical philology and slavonic studies in Vienna. Afterwards he also studied classical archeology. He actively worked as a researcher, preservationist and writer of numerous scientific and expert works. He acquired his scientific experience on the archeological sites in Greece, Asia Minor, Egypt and Syria, working together with the eminent European archaeologists of that time. He undertook a research of ancient and Old-Christian monuments of ancient Salona and discovered several hundreds of epigraphs as well as the Old-Christian graveyard in Vranjic. In 1891 he discovered a stone with an inscription of Prince Trpimir in Rizinice near Solin, and later also discovered the ruins of the monastery and church of the Benedictines whom Trpimir invited to Croatia. In Bijaci near Trogir he founded the foundations of Trpimir's church that was dedicated to St Martha and then in Majdan near Solin he founded the graveyard dating from the times of the Croatian national dynasty. Of particular importance is his research on the island on the river in Solin, Otok, where he discovered the sarcophagus of the Croatian queen Jelena from the year 976.