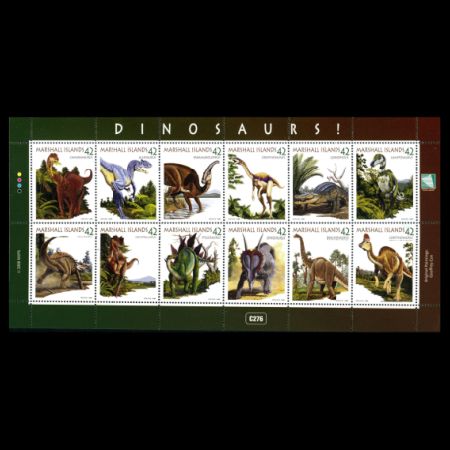 On June 19, 2008, the Marshall Islands Postal Service issues 12 new stamps delving into the amazing world of Dinosaurs. The name "dinosaur" comes from the Greek words dinos, meaning terrible, and sauros, meaning lizard. When these colossal reptiles ruled the earth countless millennia ago, North America was a low-lying continent with a great sea bordered by swamps. Huge plant-eating dinosaurs grazed in the steaming bogs and fearsome flesh-eating dinosaurs preyed upon the plant-eaters until, for unknown reasons, they all disappeared. One theory holds that when mountain ranges rose, the vast swampy home of the dinosaurs dried up and shifts in climate occurred, causing tremendous changes in the world's fauna. Old plants died out and were replaced by new ones which the plant-eating dinosaurs could not stomach. In turn, as the plant-eaters perished, the meat-eaters that fed upon them met their own demise, and the magnificent era of dinosaurs ended. Featuring artwork by famed New Zealand artist Geoffrey Cox, the stamps show 12 of the most remarkable dinosaurs ever to walk the planet.
Notes: Goniopholis is not a dinosaur but a crocodilian, Edmontonia is misspelled Edmontia.