Soviet Union / USSR 1991 - "The sculpture of fighting Brontosaurus with Ceratosaurus" 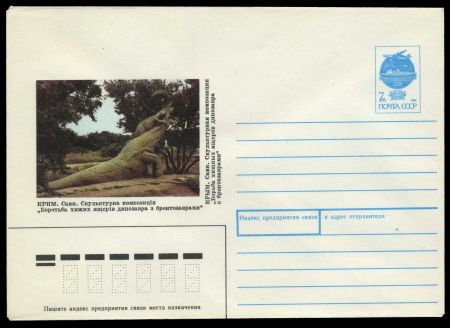 On May 13, 1991, the Post Authority of Soviet Union issued a prestamped envelope with the sculpture of "Fighting Brontosaurus with Ceratosaurus" from Saki town in Crimea peninsula on the cachet.
Saki (or Saky) is a small resort town on the Crimean Peninsula. It was one of the earliest resort towns in Russia – and still today is a year-around mud resort feted for its therapeutic muds.
The town has a population of 25,000.
Its status is disputed along with the rest of the Crimean Peninsula which Russia annexed from the Ukraine in 2014. The sculpture was made of xylene (a mixture of sawdust and magnesian cement), which was produced by the Saki's chemical plant.
It was installed on the bank of the "Black Sea" artificial pond, in the Saki resort park.

The sculpture was installed in 1932 and was the first sculpture of dinosaurs mounted in a public place, on the mainland of Europe and one of the first such statues in the world.


The first dinosaur sculptures were created by Benjamin Hawkes for the Great Exhibition at the Crystal Palace in London in 1854.
A statue of Brontosaurus was created at the Zoo in Hamburg in 1907 (the first Sauropod sculpture to be exhibited).
A life-size Iguanodon sculpture was installed at the entrance of the Aquarium in the Berlin Zoo in 1913.
All of these earlier exhibits required guests to purchase tickets to see these sculptures.
The Sculpture at Saki was installed in open park and no ticket was required to come and see it.

The sculptures were constructed at life size – with a 20 meter long Brontosaurus and 4 meter long Ceratosaurus.

The reason for the installation of this sculpture is not clear. The first dinosaur bones were uncovered in the region two years later in 1934 – and were identified as bones belonging to Hadrosaurus.
Most of the sculptures installed on the territory of USSR in 1930s where sculptures of communist leaders or propaganda of the socialist lifestyle.
Prior to starting his work on the dinosaur sculpture, the sculptor made some "classical" Soviet sculptures, which were installed in the Crimea. Some of them even survived till today.
Perhaps this was the condition to get permission for the dinosaur's sculpture installation.


The sculptor of the sculpture is Sergei Alexandrovich Likhosherstov (1894-1940), born in Crimea.
Likhosherstov studied Natural Science in Kharkov University and had a passion for paleontology.
In 1920, he returned to the Crimea. In 1925, he was employed as a research assistant at the Yevpatoriya Museum of Local Lore.
(Yevpatoriya is a bigger town, with population of over 100.000, and regional centre, next to Saki.) His passion for paleontology never left him – he collected postcards depicting dinosaurs, pterosaurs, and other prehistoric animals.

The sculpture copies the theme of a painting by the famous German paleo-artist, Heinrich Harder – “Fight of prehistoric animals – Brontosaurus fights with Ceratosaurus”. This painting was first published in the German encyclopedia “Die Wunder der Natur” (The Wonders of Nature) in 1910.
Later on it was reproduced in many books and magazines around the world, including Russia, in the first half of the 20th century.
The sculptures were annually painted green with a red stripe to symbolize the blood of the Brontosaurus, similar to the image published in the Russian magazine "Знание для всех" (in English: "knowledge for everybody"), in 1916.

Heinrich Harder (1858-1935) was a German artist and an art professor at the Prussian Academy of Arts in Berlin best known for his depictions of extinct animals.
Between 1902 and 1920, Harder prepared 60 lithographs for the series Tiere der Urwelt ("Animals of the Primeval World") by the Hamburg cocoa and chocolate manufacturer Theodor Reichardt, depicting dinosaurs, trilobites, ammonites, and primeval mammals.
(The "Fighting Brontosaurus with Ceratosaurus"" was not the part of the set)

In 1913, Harder designed a series of reliefs and mosaics on the two façades of the newly-built aquarium of the Berlin Zoo.
They show prehistoric creatures, such as dinosaurs, fossil invertebrates, extinct reptiles, and extinct mammals.
He also helped create a large statue of an Iguanodon on the Zoo side of the aquarium building, together with the sculptor Otto Markert.
The statue of the Iguanodon appeared on stamps of West Berlin 1977.


Prior to the construction of the Saki Scuplture, a strong storm had destroyed the nearby town of Niolaevka at the end of the 1920s.
During the storm, some fossilized bones were washed up on shore – and were later identified as belonging to a Mammoth. By the time the scientists had arrived, most of the bones had been collected by local residents.
In order to encourage the residents to turn in the bones, the scientists from the Museum of Local Lore presented a lecture on prehistoric animals and the importance of such finds for local residents.
The sculpture was another way to show the importance of prehistoric life to the citizens of Saki.
It is also believed, that before this event Likhosherstov created some sculptures for the Paris exhibition of sculptures of prehistoric animals and then decided to make a large Brontosaurus.

At the same time on the other end of the world in the USA, Sinclair Refining Company started using Brontosaurus in their advertising as a symbol of the dramatic age and quality of their petroleum products. The company also installed a life-size model of Brontosaurus in their section of the “Century of Progress” exhibit at the World Fair in Chicago in 1933.

On April 29, 2005, the Saki City Council approved the coat of arms of the city which depicted Brontosaurus (nicknamed Bronthy by Saki's residents) on it. Today, Saki is the only city in Europe with a dinosaur figure depicted on its coat of arms.
The description of the coat of arms explains "the Brontosaurus reflects the antiquity of Lake Saki, the uniqueness of its bottom sediments, which have been turning into a healing substrate for many millennia."

Some years ago, the park and some resort buildings next to it were sold to a private company, who put a fence around the site.
Perhaps the statue will be moved to a new, public, place sometimes in the feature to allow free access to this sightseeing object of the town.