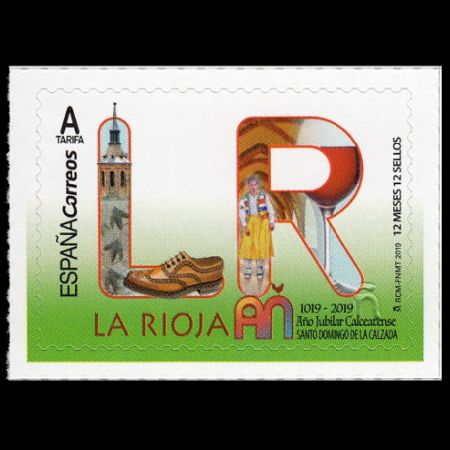 A province that throughout history has been a land of passage, borders, battles but today, thanks to its long history, contains numerous attractions that make us stop and stop to know this province. Sometimes it is known as " that of the seven valleys " because geographically it is divided by seven rivers that descend from the mountain towards the Ebro, which is the backbone of the region. Traditionally, it is divided into three subregions from west to east, following the course of the Ebro: La Rioja Alta , La Rioja Media and La Rioja Baja . Each of them with their corresponding central and service municipalities.

Under the letters LR and the color green in the lower strip as the color of the province of La Rioja, different characteristic elements of this province have been included.

The logo of the Calceate Jubilee Year (1019-2019) , which began on April 25, 2019 and will end on January 12, 2020, in Santo Domingo de la Calzada. A thousand years ago, Santo Domingo de la Calzada was born, a key figure in the consolidation of the Camino de Santiago as an open route for pilgrims from all over the world. The Calceate Jubilee Year is a direct allusion to this millennium, a tribute to the origins of a vocation and the foundations of a spiritual Path that has been essential in the tourist, cultural, heritage and social development of La Rioja.

Monumentally they appear on the stamp on one side a tower of the Yuso Monastery in San Millán de la Cogolla and on the other, the interior of the Valvanera Monastery, the latter also known for a traditional liquor that continues to be produced today. One of the riches of the Monasteries is their libraries since these spaces were nerve centers of culture, especially in the Middle Ages. The monastery archive and library of the Yuso Monastery is considered among the best in Spain, where two cartularies and three hundred original volumes are kept. The origin of the construction of the monastery is reflected in a legend that tells how King García, that of Nájera, ordered the transfer of the remains of San Millán that were in Suso to the monastery of Santa María La Real de Nájera. The oxen pulling the cart stopped the valley as if the remains of the Saint did not want to abandon it, building the current Yuso monastery there. A Romanesque monastery from the 10th and 11th centuries, of which there are currently no remains, on which the current Yuso monastery was built between the 16th and 18th centuries by the Benedictine abbots. The Benedictine monks moved to the monastery in the 10th century. One of the most relevant abbots was Domingo, a native of the Rioja town of Cañas, better known as Santo Domingo de Silos.

A glass of wine appears to honor the Rioja PDO, which is the oldest in Spain (1925) and the first to obtain the Qualified (1991), being, therefore, a pioneer in the good work of wine.

Every July 22 in the town of Anguiano and coinciding with the Feast of the Magdalena, the spectacular dance takes place on wooden stilts 45 cm high, performed by eight young people from the town dressed in colored vests and yellow skirts that are thrown from the church along the cobbled slope to the plaza.

There are written documents on the dance of Anguiano dated in 1603, although a much older origin is supposed. It is in any case the oldest folk manifestation in La Rioja.

More than 120 million years ago in this place, Enciso, dinosaurs lived . They lived in a unique enclave, in the ancient Tethys Sea, where they left their footprints. Today we continue to be amazed with their habitat, their food, their way of life, hunting ... that is, with the authentic nature of the great saurians.