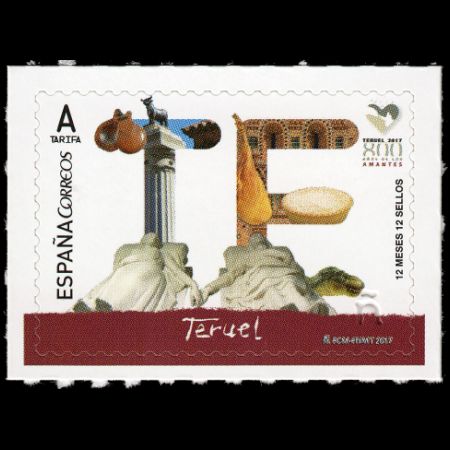 On October 2, 2017, Post Authority of Spain issued the tenth stamp of set "12 month, 12 stamps, 12 regions". This stamp dedicated to Teruel.
The province is represented on the stamp with the letters TE, alluding to the old vehicle number plates in Spain. The stamp will also be used as a single form of postage during the month in which it is issued in this province. Its design includes the most characteristic elements of this area.

One of such characteristic elements are dinosaurs. Head of one of them shown on the bottom-right corner of the stamp.
The province of Teruel boasts the largest number of palaeontological sites in Aragon. There are numerous footprints and fossils of Aragosaurus, the first Spanish dinosaur, and Turiasaurus riodevensis, the largest dinosaur in Europe.

Aragosaurus (meaning "Aragon lizard") was a genus of sauropod dinosaur from the Early Cretaceous period of Galve, province of Teruel, in the autonomous territory of Aragón, Spain. Aragosaurus was a large, quadrupedal plant-eating dinosaur, which lived about 133-125 million years ago. It was about 18 metres in length and about 28 tonnes in weight. Like other sauropods, it had a long neck, a long powerful tail, a small head and a bulky body.
Turiasaurus riodevensis, was a sauropod dinosaur, is believed to be the largest dinosaur ever found in Europe, and is among the largest dinosaurs known to date, at 36–39 metres in length and with a weight of 40 to 48 tonnes.

The “torico”. A small stone bull on a tall column presides the square popularly known as the “Plaza del Torico”. The relationship between Teruel and bulls goes a long way back, as seen in archaeological finds of coins with bull and star motifs.
Castanets. This percussion instrument is a well-known symbol of Spain, and is thought to have originated with the Phoenicians, around three thousand years ago. In Teruel, it is typically used for the local folk dance, the jota.
Torre de San Martín. This tower in the Aragonese Mudéjar style, has been a World Heritage Site since 1986. It was built in the early 14th century and imitates the structure of the Almohad minarets.
Teruel ham. With a Protected Desigation of Origin, it is said to be the best white pork ham in the world.
Suspiros de amante. This is a traditional Teruel pastry, made with eggs, butter, sugar and cheese. It is especially typical during the medieval festival, celebrating the wedding of Isabel de Segura.
Finally, the stamp depicts the sculpture of the Lovers of Teruel, the protagonists of a legendary love story. The red stripe along the bottom alludes to one of the colours of the provincial flag. It also features the logo of the 800th anniversary of the Lovers of Teruel, designed by Carmen Porto and chosen by popular vote.