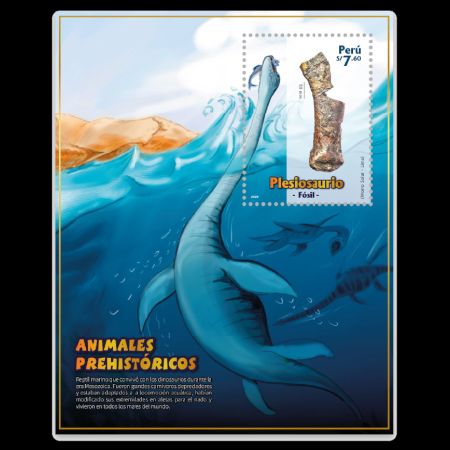 On November 14th 2022, the Post Authority of Peru - Serpost, issued the Souvenir-Sheet "Prehistoric animals: Plesiosaur", similar to the sheets issued between 2007 and 2014.
The stamp in the Souvenir-Sheet shows one of the fragmental fossils (propodium) discovered in Cretaceous rocks cropping out at Morro Solar. The Morro Solar promontory has a topographic height of 281 m and occupies 7.48 km2. It is located south of the Chorillos locality in Lima Province (see on the right).

135 million years ago, most of the territory of Peru was under water.
The important fossil material found includes a propodium (an upper limb bone, either the femur or humerus), three vertebrae and an ilium (pelvic bone). Due to the fragmented nature of the fossils, it is impossible to assign them to any species - therefore, the reconstruction on the margin shows a stylized Plesiosaur (Plesiosauria indet.).

In 2000, a team led by Manuel Rojas Aquije and Jose O'Gorman from the National University of La Plata, Argentina and Ivan Meza-Velez from the National University of San Marcos (UNMSM) collected material referable to Plesiosauria indet. (MUSM 3735), in levels of the La Herradura Formation, Morro Solar locality, Peru. The specimen was donated by the latter to the collection of the Department of Vertebrate Paleontology of the Natural History Museum of the UNMSM. This is the first record of Plesiosauria from the Morro Solar Group.

The record of South American plesiosaurs has increased in the last decades; they have been recorded in Colombia, Venezuela, Chile and Argentina. Despite this recent increase in the record of South American Cretaceous plesiosaurs, the plesiosaurian record from Peru is almost null.
“Until now there was only one plesiosaur fossil from the Lower Cretaceous of the Pacific coast of South America, which indicated that they did not live in large numbers in this part of the planet, but with this discovery it is confirmed that Plesiosaurs inhabited all the seas of the world”, Iván Meza-Vélez, biologist at the UNMSM Museum of Natural History and author of the study published in the journal Cretaceous Research, explains to El Comercio.

Plesiosaurs (clade Plesiosauria) are members of a group of long-necked marine reptiles found as fossils from the late Triassic Period into the late Cretaceous Period (215 million to 66 million years ago). It is distinguishable by its small head, long and slender neck, broad turtle-like body, a short tail, and two pairs of large, elongated paddles.
Plesiosaurs had a wide distribution in European seas and around the Pacific Ocean, including Australia, North America, and Asia.

Plesiosaurus, an early plesiosaur, was about 4.5 metres long, with a broad, flat body and a relatively short tail. It swam by flapping its fins in the water, much as sea lions do today, in a modified style of underwater “flight.” The nostrils were located far back on the head near the eyes. The neck was long and flexible, and the animal may have fed by swinging its head from side to side through schools of fish, capturing prey by using the long sharp teeth present in the jaws.
The first complete skeleton of Plesiosaurus was discovered by early paleontologist and fossil hunter Mary Anning in Sinemurian (Early Jurassic)-age rocks of the lower Lias Group in December 1823.
Plesiosaurus fed mainly on clams and snails, and is thought to have eaten belemnites, fish and other prey as well. Its U-shaped jaw and sharp teeth would have been like a fish trap. Its neck could have been used as a rudder when navigating during a chase.
Plesiosaurus gave live birth to live young in the water like sea snakes. The young might have lived in estuaries before moving out into the open ocean. It has been postulated that the long neck of Plesiosaurus would have been a hindrance when trying to speed up, any bend in the neck creating turbulences. If that is the case then Plesiosaurus would have had to keep its neck straight to achieve good acceleration, something that would make hunting difficult. For this reason, it may be possible that these animals would actually lie in wait for prey to come close instead of trying to pursue them.