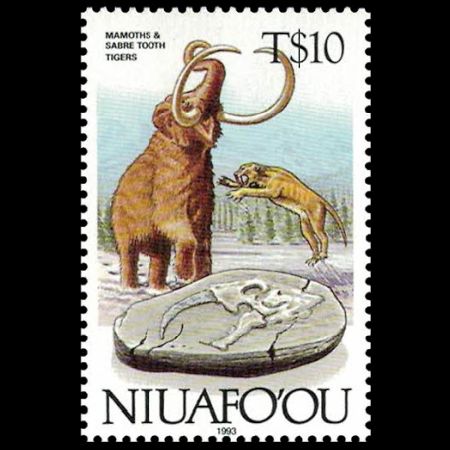 On November 14th of 1993, the Post Authority of Niuafoʻou (Tonga) issued the last stamp in their multi-year stamps set "Evolution of the Earth". (The first part of this set was issued in 1989. )
This stamp shows a Sabretooth Tiger hunting the Mammoth and the skull of the Sabretooth Tiger on the foreground.
The stamp was printed in Mini-Sheet of 10 stamps with 2 tabs in the middle. The tabs shows some scenes from the "Evolution of the Earth" stamps of the previous years.

[1] The "SPECIMEN" overprint in black was the normal specimen overprint done for most sets ot Tonga from 1981 to 1997.