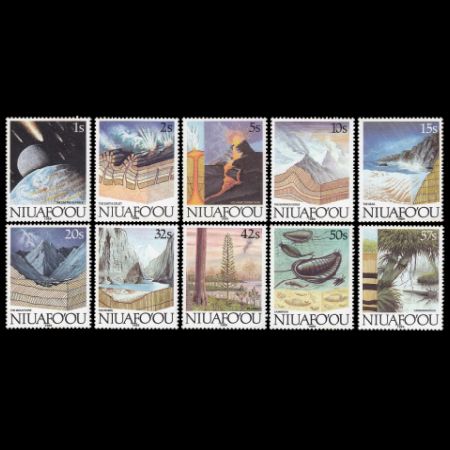 On June 6, 1989, the Post office of the Government of Tonga on behalf their Niuafo'ou Island, issued the set of 10 stamps that shows "Evolution of the Earth". These stamps shows ten major scenes of the Earth evoultion until appearance of the early life forms.
(Less than two months later, four more stamps of the same theme were issued.)

[1] The Monochrome Proofs were done on thin card and in black and white by Walsall Security Printers of London UK, and were used to check the design.
The monochrome proofs were, usually, produced in amount of 20, then sent to Tonga for the officials to check. When accepted, they were sent to stamp magazines to illustrate the upcoming new issues.