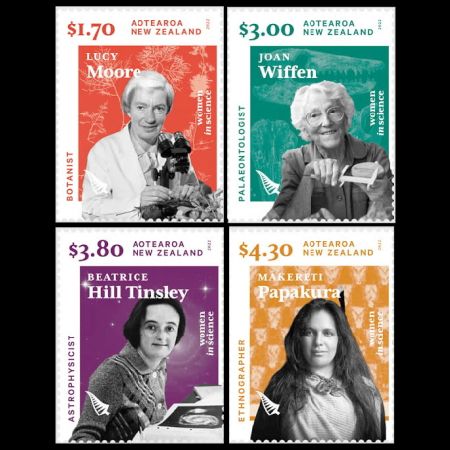 On November 2nd 2022, the Post Authority of New Zealand issued the stamps set "Women in Science". The set contain four stamps, printed in individual Sheets of 20 and all together in a Mini-Sheet of 4.
According to the official press release, Mākereti Papakura, Lucy Moore, Joan Wiffen and Beatrice Hill Tinsley are four remarkable New Zealand women who achieved in the scientific fields of ethnography, botany, palaeontology and cosmology in the 20th century. Their contributions opened our eyes to our past, the natural world, our cultural traditions and legacies, and the universe.

The green stamp ($3.0) depicts Joan Wiffen (1922-2009) - a self-taught palaeontologist.
In 1975 Wiffen discovered the first dinosaur fossils in New Zealand in the Mangahouanga Valley in Northern Hawkes Bay. She knew the bone was unusual, and of a land-dwelling creature, but it was several years before it was identified as belonging to a theropod dinosaur. It was a remarkable discovery that rewrote the textbooks of this country’s natural history. Before then, there was no evidence that dinosaurs had ever lived in the country.
Most people believed that New Zealand had never had dinosaurs as the country had been isolated from other lands for so long that it did not seem likely.
The Wiffen family and interested friends spent their weekends and holidays at Mangahouanga Stream, and later built a hut as a base there. They have found at the Mangahouanga site fossil bones of at least three kinds of carnivorous dinosaur, three kinds of herbivorous dinosaur, and one kind of flying reptile. That is quite apart from some fine examples of marine reptile fossils and some rare and unique examples of other marine species.
These discoveries show dinosaurs lived in New Zealand after it split away from Gondwana in the Early Cretaceous.
As collecting continued, the Wiffen's eventually extracted almost complete plesiosaur and mosasaur skulls, and marine reptiles remained Joan’s main focus for the rest of her career.
The skull of the Mosasaur Prognathodon overtoni is shown on the background of the stamp.
It is a reproduction of a plate from "New mosasaurs (Reptilia; Family Mosasauridae) from the Upper Cretaceous of North Island, New Zealand" an article written by Joan Wiffen in 1990.
In 1974 Wiffen found the skull of another mosasaur. In 1980 Wiffen published her first scientific paper describing a new mosasaur that she named Moanasaurus mangahouagae which is depicted on stamp of New Zealand in 2010.
From the 1980s onwards she was increasingly recognised as the expert on New Zealand’s Cretaceous reptiles.
Joan Wiffen (née Pedersen) was born in 1922 and was brought up in Havelock North and the King Country.
Her father believe that higher education was wasted on girls, so Joan's educational opportunities were limited to a short secondary school education.
At the age of 16, Wiffen joined the Women's Auxiliary Air Force during World War II where she served as a clerk for six years. She was trained as a radar plotter, then posted to Northern Group Headquarters in Auckland. She later worked as a medical clerk at Ardmore, Blenheim and Wigram.
In 1953 she married Pont Wiffen, and they made a life together on a small farm in Hawke’s Bay, where they restored the derelict buildings, made a garden, raised two children and assorted farm animals, ran a couple of greenhouses and an asparagus patch, while Pont also worked in town. Joan’s interest in science was kindled through the natural history books she obtained to share with her young children.
In the late 1960s Pont and Joan developed an interest in collecting and polishing stones after Pont attended a geology night class. Pont and Joan Wiffen travelled widely in both New Zealand and Australia collecting both minerals and small fossils of sea animals with their children.
Both joined the local rock and mineral club, and in 1969 they visited Queensland with a group interested in Australian minerals and gemstones. Joan purchased a small trilobite fossil for 50 cents. She had been fascinated by fossilised shells on the Hawke’s Bay hillsides of her childhood, and she now realised that she was more interested in fossils than polished stones. Joan soon convinced Pont to focus on fossils instead of gemstones.
The couple were very interested in fossils, and Pont ended up taking classes on fossils. One day when Pont was home sick, Joan went to the class in his place and ever since then she was in awe of dinosaurs and fossils.
All of the specimens Joan illustrated and described were deposited in National Palaeontological Collections at Institute of Geological and Nuclear Sciences (GNS).
The marine invertebrates, mainly shells, were passed on to the New Zealand Geological Survey and other experts.


Joan Wiffen was a remarkable model for women in science – tenacious, courageous, and adaptable. Joan’s work on fossil reptiles was recognised by a special award from the Geological Society of New Zealand in 1986; by an honorary doctorate from Massey University in 1994; by the award of a Commander of the British Empire (CBE) in the 1995 New Year’s honours; and by the Morris Skinner award from the Society of Vertebrate Paleontology in 2004 for her contributions to scientific knowledge.
In 2017, Wiffen was selected as one of the Royal Society Te Apārangi's "150 women in 150 words", celebrating the contributions of women to knowledge in New Zealand.