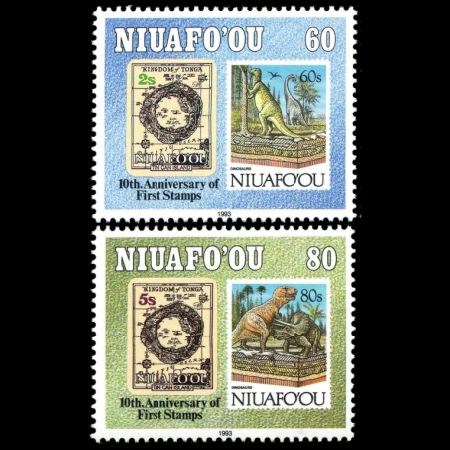 On May 3rd of 1993, the Post office of the Government of Tonga on behalf their Niuafo'ou Island, issued a set of 2 stamps "10 years of Niuafo’ou's stamps".
The left side of each stamp shows the map of the Niuafoʻou Island.
The right side of each stamp reproduces one of the dinosaur stamps from the "Evolution of the Earth (IV)" set, issued two months earlier.
During the "Dinosaurs Time" the Island was not exist. Niuafo'ou is a subaerial shield volcano formed by submarine explosive and effusive activity during the Holocene. (The Holocene is the current geological epoch, began approximately 11,650 years before present).

[1] The Cromalin Proofs are thick cardboard and in full colour, a proofing method used by Walsall Security Printers in which full color proofs are produced directly from the color separations prior to final production of the printing plates.
Each color is layered on top of the next thus building up to the full color design. The cromalin proofs never left the printing house in UK and were issued in small amount (3 or 4 pieces each).

[3] The "SPECIMEN" overprint in black was the normal specimen overprint done for most sets ot Tonga from 1981 to 1997.