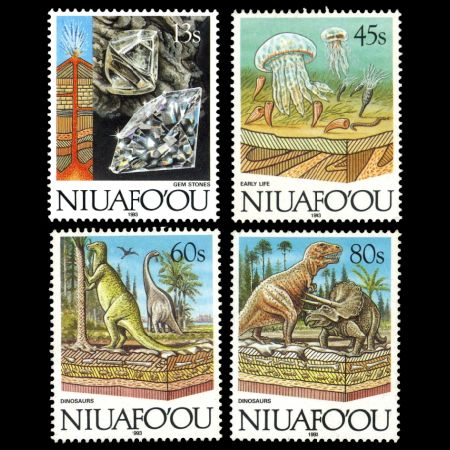 On March 3rd of 1993, the Post office of the Government of Tonga on of behalf their Niuafo'ou Island, issued the set of 4 stamps "Evolution of the Earth (IV)".
The first three sets were issued in 1989.

The first stamp of the set shows the formation of gemstones. The second shows a scene of early marine life: Jellyfish, sponges and worms Two other stamps shows some dinosaurs. The designs from these stamps were reused for the "10 years of Niuafo'ou's Stamps" set issued 2 months later and for the "International Stamp Exhibit Singapore '95" set released in 1995.

During the "Dinosaurs Time" the Island did not exist. Niuafo'ou is a subaerial shield volcano formed by submarine explosive and effusive activity during the Holocene. (The Holocene is the current geological epoch, which began approximately 11,650 years before present).

The first stamp shows a pair of herbivorous Dinosaurs such as Iguanodon and Brachiosaurus and a pterosaur Rhamphorhynchid fligt above them.
The second one shows the classic scene - the flight of Triceratops with the Tyrannosaurus-rex.
Triceratops, indeed, shared the landscape with and was most likely preyed upon by Tyrannosaurus. So far, no one has found direct evidence of a Tyrannosaurus versus Triceratops battle. A healed bite wound on a Triceratops skeleton or an injured Tyrannosaurus bone corresponding to damage that could have only been made by a horn would provide paleontologists with a sign that these dinosaurs actually fought. For many years this fight was shown on images and movies where a Triceratops run, rhino-like, into the belly of a Tyrannosaurus.
According to recent research, this defense mechanism would have not helped Triceratops out - as it would likely smash its skull and kill itself attempting it.
Most likely Triceratops would have tried to defend itself in a manner similar to modern horned animals. They would likely have shaken their heads from side to side and try to hit the aggressor.

Tonga did not issue any imperforate stamps from this set, the only imperfs known are genuine plate proofs, and come from the Walsall Security Printers archives.
Notes:

[1] Monochrome Proofs were done on thin card and in black and white by Walsall Security Printers of London UK and were used to check the design.
The monochrome proofs were, usually, produced in amounts of 20, then sent to Tonga for the officials to check. When accepted, they were sent to stamp magazines to illustrate the upcoming new issues.

[2] The "SPECIMEN" overprint in black was the normal specimen overprint done for most sets of Tonga from 1981 to 1997.