Mexico 2011 "Health and Safety in Mexico" 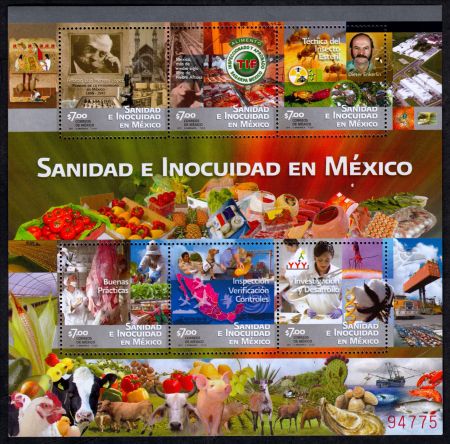 On October 18th, 2011, the Post of Mexico issued a Mini-Sheet with 6 stamps and large margings - "Health and Safety in Mexico".
Four stamps shows food production and control process.
Two other stamps shows famous Mexican personalities entomologist Dieter Enkerlin (1926-1995) and biologist Alfonso Luis Herrera (1868-1942).
The stamp of Alfonso Luis Herrera shows not only his portrait, but also a building of the “Museo del Chopo” and a dinosaur skeleton in front of it, in the stamp background.

Alfonso Luis Herrera, was a Mexican biologist, author, educator and founder of several institutions in Mexico City.
Herrera was born in Mexico City, the son of a well-known naturalist.
He studied Pharmacy at the National School of Medicine, graduating in 1889 by which time he had already published several papers in Zoology and Ornithology.
An active promoter of Darwinian ideas in Latin America, Herrera was also among the first 20th century researchers to attempt to “create life in a test tube.”
Herrera’s thinking went beyond the evolution of living beings and extended to the question of the origin of life itself and the place of living phenomena in the larger context of the cosmos.


He developed an experimental science called Plasmogeny, concerned with the origin of protoplasm, the living material of which all animals and plants are made.
He reasoned that since life was the result of purely physico-chemical phenomena, it should be possible to create a structure with similar properties to natural protoplasm out of relatively simple organic and inorganic compounds in the laboratory. To this end he conducted experiments to create artificial cells ("protocells") using substances such as Olive Oil, Sodium Hydroxide, Gasoline, Thiocyanate etc.

During the late 1920s, Herrera was director of the National Museum of Natural History (now Museo Universitario del Chopo) in Mexico City.
After reading that the American steel entrepreneur and philanthropist Andrew Carnegia (1835-1919) had made several replicas of the skeleton of Diplodocus carnegii and had donated them to the most important natural history museums in the Western World, Herrera worked to secure a copy for his museum.

The dinosaur was discovered by William Reed in Wyoming, Utah in 1899 and named in honor of Andrew Carnegie, promoter and sponsor of numerous paleontological excavations and scientific projects that took place in the early 20th century. After the discovery, the remains of the dinosaur were transferred to Pittsburgh, Pennsylvania, where the specimen was mounted. It was shown to the public for the first time in 1907, in the main room of the Carnegie Museum of Natural History, a place built expressly for its exhibition, since at that time there was no museum that had a room large enough for its placement.

Herrera asked the ambassador of Mexico to the United States, Manuel Téllez to contact the window of Carnegie - Mrs. Louise Carnegie to request the donation of a replica of the dinosaur skeleton for the then National Museum of Natural History in Mexico City.
The ambassador made the formal petition to Carnegie, who liked the idea and turned the request over to William J. Holland (1848—1932), director of the Carnegie Museum.

Herrera thought that being a reptile it would be preferable to place the specimen at the edge of the lake, since probably while it lived it fed on succulent aquatic plants and spent a large part of its life in the water.
Therefore he asked for a bronze cast for outdoor display, but when this proved prohibitively expensive, a plaster version was produced instead.
In 1929, the Chopo University Museum in Mexico City received the Diplodocus cast from the Carnegie Museum in USA.
The cast measured 27 meters long by 4 meters high. Due the fact it was too high for the room in the museum, the neck and skull of the Diplodocus were mounted horizontally. Other copies were mounted with the neck and head held vertically above the body.

During the replica installation William J. Holland recalled seeing a dinosaur bone on exhibition at the museum.
He wrote, “I found in a corner of the museum among the paleontological material the femur of a small dinosaur found in the state of Chihuahua. There are Jurassic deposits in northern Mexico, and possibly elsewhere, and our Mexican friends may ﬁnd on their own soil some of the huge dinosaurs of the Mesozoic age. Let us hope so.” Holland’s words have proven to be prophetic as seen by recent discoveries.