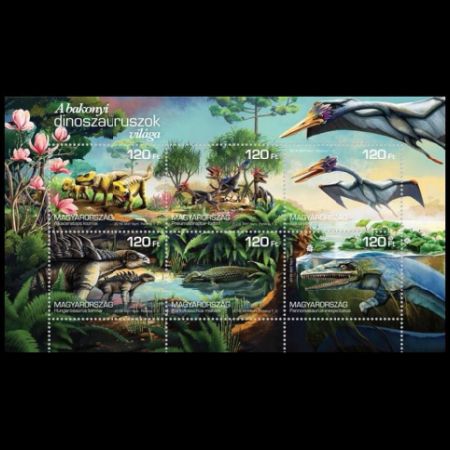 On September 3rd 2018, Magyar Posta issued Miniature sheet about the world of dinosaurs, once the rulers of the Earth’s biosphere.
"This miniature sheet takes us back 85 million years in the history of the Earth right to the Late Cretaceous epoch. In these prehistoric times our planet looked entirely different. The continents had different shapes, the climate was not the same, and the plants and animals inhabiting the land and the seas were most unlike today’s flora and fauna. People did not live yet, so no drawing or photograph could be made of these creatures and everything that we know about these animals is based on the scientific study of fossils found in rocks.

Every geological period has its characteristic organisms. In the epoch visited with the stamps, dinosaurs and their close relatives were the dominant animals. The word dinosaur means fearfully great or terrible lizard or reptile. When in the middle of the 19th century scientists started using this name, they knew far less than we do today as this expression is not entirely accurate. Some of these beings were in fact giant animals with a frightening appearance, which caught the imagination of many people, but most of them were the size of a human or smaller, so not all were terrible. Not to mention the fact that dinosaurs are only distant relations of today’s lizards. They are much closer to today’s birds, which their similar habits of making a nest among other things suggest.

The miniature sheet presents a few of the dinosaurs and ancient reptiles together with their habitat whose fossils have been found in the Bakony hills in Hungary. The top row of the miniature sheet of six different stamps consists of the quadrupedal herbivorous Ajkaceratops kozmai, the small, at most turkey-sized, probably pack-hunting Pneumatoraptor fodori, and the dragon of the Bakony, the omnivorous flying reptile with a wingspan of about 3.5 to 4 metres named Bakonydraco galaczi. In the bottom row, the 4 to 4.5 metre long, quadrupedal herbivorous armoured dinosaur Hungarosaurus tormai, the at most 1 metre long short-nosed Iharkutosuchus makadii, which taxonomically can be placed among modern crocodiles, and the aquatic apex predator at the time, a mosasaurus that adapted to a freshwater environment, Pannoniasaurus inexpectatus, can be seen. The special postmark shows the beak of the 1.5 metre long, herbivorous Ajkaceratops kozmai with a small horn and characteristic parrot-like bill.

Now look up from the miniature sheet and return to the present. Dinosaurs ruled the Earth for 175 million years before all their species went extinct, except for birds, 66 million years ago. Between their disappearance and the appearance of man, over three hundred times as much time passed than between the appearance of man and the present day. Apart from scientific works, they are the subject of many books, films and games, and they continue to be as popular as ever. "
Source: Dr. Attila Ősi, László Makádi, Gábor Botfalvai and Emese Réka Bodor:
A bakonyi dinoszauruszok csodálatos világa, Budapest 2015