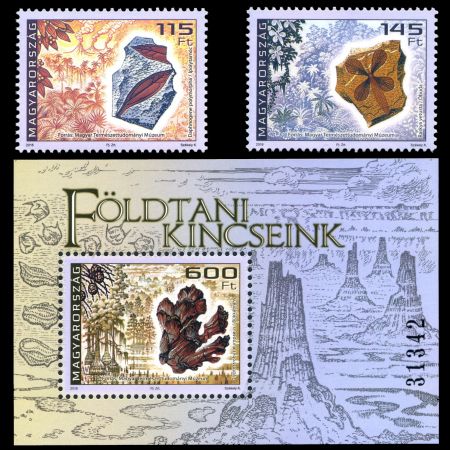 On June 8, 2016 Hungarian Post Authority (Magyar Posta ) issued the set of two stamps and a block stamp on the theme of Hungary’s geological treasures. Face value of these stamps are:: HUF 115 (domestic non-priority standard letter or postcard); HUF 145 (domestic priority standard letter or postcard); HUF 600 (domestic priority letter up to 500 g)
The design of the block features Late Miocene swamp cypresses from Bükkábrány, while the fossil of a member of the laurel family from Ipolytarnóc and Early Oligocene plants from Óbuda appear on the denominations of the set. The latter shows a specimen of the fossil species Raskya vetusta in honour of the eminent Hungarian palaeobotanist Dr Klára Rásky (1908-1971). An interesting aspect of the designs is that the graphic artist
Kálmán Székely set the finds in their imagined original environments. The fossilized remains of a swamp cypress forest were found 60 metres below the ground in an open-cast lignite mine near Bükkábrány in Borsod-Abaúj-Zemplén county in July 2007. It is thought that this area was a swamp cypress forest on the northern shore of the Pannonian Sea in the Late Miocene about 7 to 8 million years ago. The cypresses were 30 to 40 metres high. A sudden sandstorm or mudflow may have caused the trees to die, covering the lower part of their trunks to a height of 6 metres which preserved them.

The Ipolytarnóc Fossils Nature Conservation Area is a world renowned early Miocene palaeontological site and a European protected area, which was buried in a volcanic catastrophe similar to Pompeii 17 million years ago. Scientific investigations in the area began in 1836 and it has been protected since 1944. Its most important fossilized remains are the shoreline layer bearing sharks teeth, the enormous petrified trees of a subtropical forest, impressions of plants and the footprints of animals and fossils caught in the deluge of volcanic tuff.
Tard Clay formed in the Early Oligocene came to light in Óbuda while extracting clay for brick making. Many varied specimens of fossilized plants typical of subtropical regions roughly 30 million years old were discovered, demonstrating the abundance and diversity of the vegetation that once existed in the area.
The special cover honours the palaeobotanist Gyula Kováts (1815-73), whose collections and work describing and classifying the finds laid the foundations of research into palaeobotany in Hungary. His books “The Fossil Flora of Erdőbénye” and “The Fossil Flora of Tállya” were published in 1856, establishing palaeobotany in Hungary.