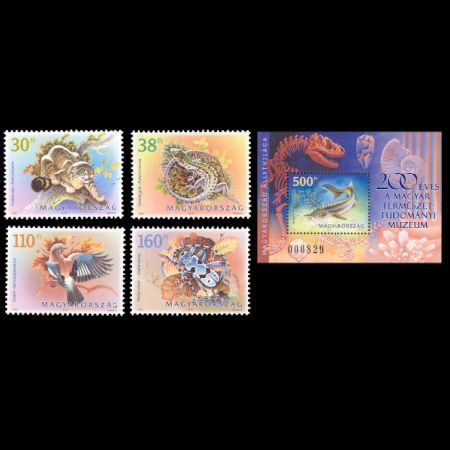 The Hungarian Post Office Ltd. has begun the issue of a new series. In the designs of the stamp series and miniature sheet, typical species of Hungarian fauna are depicting together with motifs referring to each animal’s habitat.
The wildcat (Felis sylvestris) is about a third bigger than the domestic cat. A solitary creature, it lives in large reedy areas. It sleeps during the day and starts hunting at dusk. The wildcat is a useful animal as it kills vermin.
The Balkan wall lizard (Podarcis taurica), with an average length of 15 cm, usually lives on loose, sandy soil. Compared to other species of lizard, it is much tamer and moves more slowly. It hunts in the morning hours and feeds on insects.
The jay (Garrulus glandarius), known as an excellent imitator of sounds, mainly feeds on worms, insects and berries. Its black wings have patches of blue and black stripes, and white, and the feathers on its head can be raised into a crest.
The longhorn beetle (Rosalia alpina) is indigenous to deciduous forests in hilly regions or mountainous areas. Its dark blue or bluish-grey hair and velvety black pattern on its wing cases and foreback are unmistakable.
The stamp design of the miniature sheet depicts a typical Hungarian fish, the sterlet (Acipenser ruthenus). It belongs to the sturgeon family, and is a valuable and delicious freshwater fish.
The drawing in the miniature sheet’s frame commemorates the 200th anniversary of the foundation of the Natural Science Museum. It depicts a column cap, symbolising the institution itself, together with other motifs such as a dinosaur skeleton, fossils, crystals and flint-flakes, symbolising the specialist areas of the museum (the Animal, the Plant, the Earth and Fossil, the Mineral and Rock, and the Anthropological Collections).

Some examples of prehistoric animal collection of the museum: