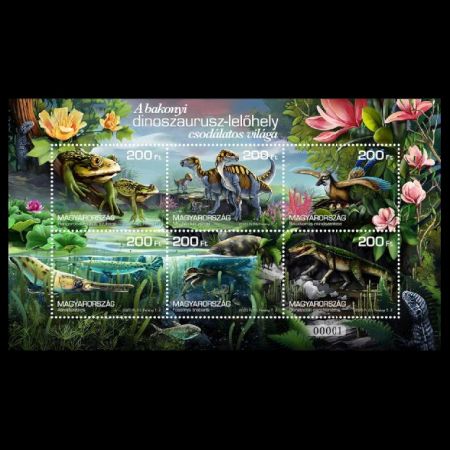 On the March 4th, 2020 Hungarian Post issued a Mini-Sheet with six stamps of prehistoric animals,  which fossils are excavated at Bakony region. This is the  second issue, following the concept begun in 2018,

In the spring of 2000, after much preliminary information collecting and research, the first dinosaur fossils in modern Hungary were unearthed from a sandstone formation at Iharkút in the Bakony Mountains. After the initial finds, more fossils came to light, and in the subsequent years, in addition to numerous small collecting trips, research camps lasting several weeks were regularly organized, where contiguous skeletons and several thousand individual bones and teeth were found.

The design of the six stamps of the souvenir sheet shows the following creatures in this order:
Hungarobatrachus szukacsi  (meaning "Hungarian frog") is an extinct genus of advanced frog, which lived during the upper Cretaceous period. This genus was named by Zoltán Szentesi and Márton Venczel in 2010.
Mochlodon vorosi (shown on the postmark too),  a genus of iguanodont dinosaurs from the Late Cretaceous. This specie was described from the Santonian aged Csehbánya Formation of Hungary in 2012.
Bauxitornis mindszentyae, an extinct genus of a bird which lived in what is now Hungary during Santonian aged of  the late Cretaceous period.
Atractosteus,
Foxemys trabanti  belonged to side-neck turtles, a group that retracts their head horizontally to the side instead of vertically, originating in the South-American part of the ancient Gondwanan supercontinent. (http://magyardinoszaurusz.hu/en/foxemys-trabanti/)
Doratodon carcharidens, terrestrial crocodilians from Mesozoic period, it is an enigmatic crocodilian of the European Late Cretaceous faunas and the best preserved remains are that of Doratodon carcharidens from Austria.
(http://magyardinoszaurusz.hu/en/doratodon/)