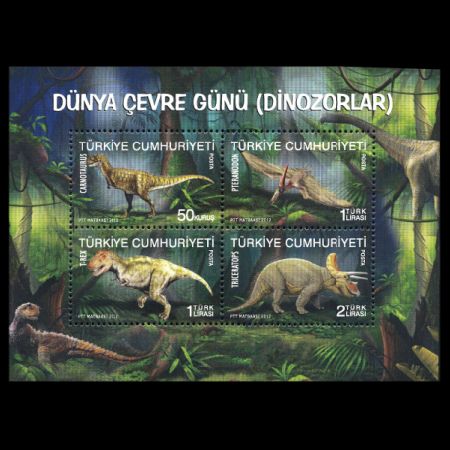 "Many of the creatures living in the worls are decreasing in numbers and their species are facing extinction. Some of the extinct species theat people wonder about the most are dinosaurs.
The dinosaurs that ruled life on land 230 millions years ago, became completely extinct 65 milions years ago. There were herbivourus, carnivorous and omnivorous dinosaur species. In 1841 Richard Owen combined the Greek worlds "deinos" (terrible), "saurus" (lizard) to name these creatures Dinosauria (Dinosaur). No answer has been found yet as to how the dinosaurs, which lived on the earth a very long time, became extinct. The generaly accepted idea is that a meteor about 10km in diameter collided with the earth.
The subject of World Environment Day (Dinosaurs) has been devoted by our organization (PTT) to create a commemortaive block, action stamp, first day envelope and an introductory booklet which have been presented for circulation."

Note: no fossils of any dinosaur or pterosaur found in Turkey to date.


Acknowledgement: Many thanks to fellow stamp collector Özkan Ipek from Turkey, for his help to find some some information about these stamps and nice covers he made and sent to me.