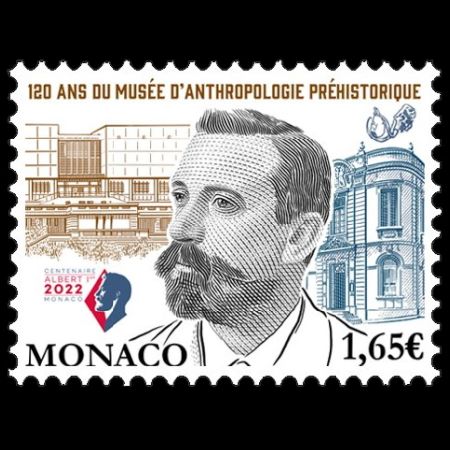 On the September 6th 2022, the Post Authority of Monaco issued the stamp "120 Years of the Museum of Prehistoric Anthropology of Monaco".
Following the Grimaldi cave digs (1895-1902) which he ordered and funded, Prince Albert I founded in the Museum of Prehistoric Anthropology in 1902, on the site of the former Government building, to preserve and display all of the finds unearthed in a single location.
In 1959, the Museum moved to a new building in the Exotic Garden.
The collections displayed tell the story of the major milestones in the evolution of humanity, through the glacial and interglacial periods.
Attached to the Government and supported by an international scientific panel, the Museum’s team conducts archaeological digs and laboratory research, and publishes scientific articles, in addition to organising exhibitions and mediation activities.

Note: The collage of Prince Albert I and the Museum of Prehistoric Anthropology of Monaco on stamps and postmarks of Monaco, on the right made by the fellow collector Peter Brandhuber, who run the facebook group "Evolution of mankind and Philately"