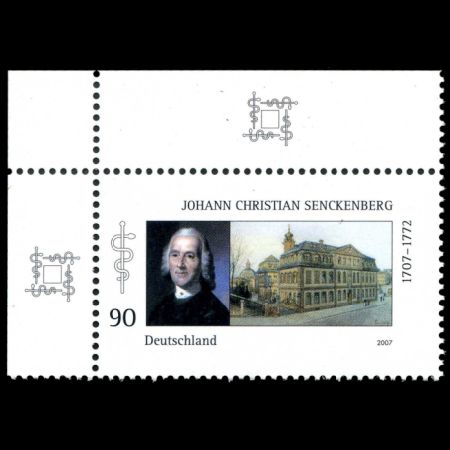 Johann Christian Senckenberg was born on 28 February 1707 in Frankfurt am Main, as the son of the city physician . At the age of 23 he began studying medicine at the Uni-Hall University and his doctorate in 1737 at the University Goettingen as a doctor of medicine. A little later opened his own practice in his native town . Private life of Senckenberg hit by heavy blows of fate: between1743 and 1756 he had his three wives and both children - they all died from infectious diseases - Carry grave. The doctors own powerlessness than different-anlasste Senckenberg 1763 to his foundation. At the heart of this foundation was a medical institute for training and educating physicians on anatomy, library, natural history and botanical collection. Senckenberg's life work has continued until today: The public hospital is located after still owned by the Foundation.
The "Senckenberg Natural History Society "is supported Senckenberg Museum full of dinosaurs is a cultural highlight of the Region and with international research projects the name of the Frankfurt physician, born in the world.
The representations of the four selected dinosaurs on the Germany 2008 "for the young " block, reflect the current state of knowledge about the gigant lizards. The Senckenberg-Museum is presenting the most extensive collection of dinosaurs throughout Germany. At least two members of the five main dinosaur groups are on display. An area of about 6.000 sqm invites you to marvel at some thousands of exihibts, some of them unique in the world, displayed in fascinating exhibitions. Discover the universe and dive into prehistoric epochs - from the "big bang" up to the origin of our planet.
The design of the stamp chosen was actually the winner of a competition. Other stamp candidate are: