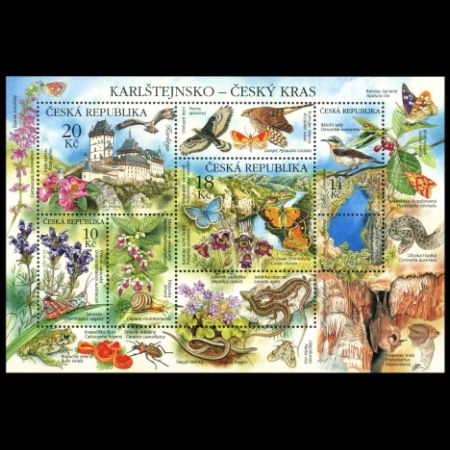 The Karlštejn National Nature Reserve (1,547 ha) was established in 1955. It covers the area between the town of Beroun and the villages of Vráž, Mořina, Karlštejn and Srbsko, within the Český kras (Bohemian Karst) Protected Landscape Area (128 km2) established later in 1972. The prevailing geological profile consists of limestone rocks with jagged karst canyons, ravines and numerous caves. The area was first populated as early as 40 thousand years ago. The thermophilic plants growing in the reserve are typical of the Mediterranean regions. Some local species, such as the pyramidal orchid (Anacamptis pyramidalis), the Austrian dragonhead (Dracocephalum austriacum), and rare orchid species, are unique and cannot be found anywhere else in Bohemia. Local animals include numerous rare species, such as over 200 species of carabid beetles; two amphibians, the great crested newt (Triturus cristatus) and the less frequent Alpine newt (Triturus alpestris); and the endangered wallcreeper (Tichodroma muraria) as a representative of birds.