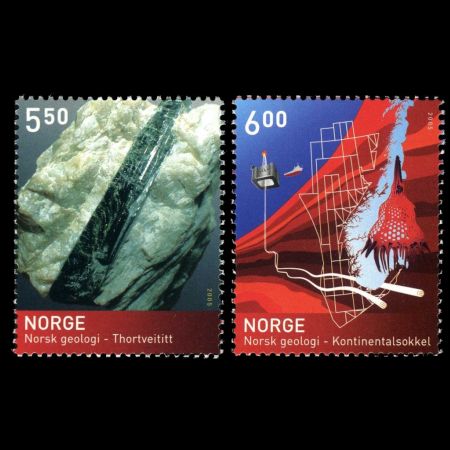 A time span of more than 4,000,000,000 years is not easy to grasp, but that is how far back in time we have to go to trace the origin of our planet. At that time, the earth was just a red-hot, molten mass. This hardened in time, arranging itself in layers. While the innermost core is solid and has a temperature of between 4,000 C and 7,000 C, the next layer is still molten and red-hot. Surrounding it is a thick mantle of heavy rock. The outermost layer, the continental and oceanic crust, is a thin shell, 70 km thick at the most. The distance to the centre of the earth is 6,371 km.
The prehistoric era (pre-Cambrian) lasted from about 4,500 million to about 545 million years before our time. Rock species from that time are spread over various land areas and geologists believe these were once part of one large continent which was split and later spread.
At the beginning of the Cambrian -period, the sea covered part of Norway. The coastline ran past Gjvik, Hamar and Trysil and the land was covered in ice. In the course of a few million years, Greenland became separated from Norway.
However, the process did not stop there. In the Devonian period, which started about 417 million years ago, Norway and Greenland were reunited as part of one continent. During the subsequent Carboniferous period, huge primeval and swamp forests came into being in what was later (when Norway and Greenland had parted company again) to become the North Sea. The primeval forest was virtually impenetrable. At times it was flooded and sand and mud were washed down from the surrounding land, burying and hermetically sealing the organic material. Today, this material is extracted in the form of oil and gas.


One of the stamp subjects, taken from the Continental Shelf, shows the connection between geology and oil and gas recovery. The other shows the world's first scandium mineral, Thortveitite. It was discovered in Setesdal in 1903 and called after Norwegian mineral exporter Olaus Thortveit (1872-1917).

Radiolarians (also radiolaria) are amoeboid protozoa (diameter 0.1-0.2 mm) that produce intricate mineral skeletons, typically with a central capsule dividing the cell into inner and outer portions, called endoplasm and ectoplasm. They are found as zooplankton throughout the ocean, and their skeletal remains cover large portions of the ocean bottom as radiolarian ooze. Due to their rapid turn-over of species, they represent an important diagnostic fossil-found from the Cambrian onwards

Lamprocyclas maritalis:
Shell campanulate, very similar to the preceding species (Lamprocyclas nuptialis) in form and fenestration, but not so slender and with different peristome. Length of the three joints = 4:5:6; breadth = 4:10:13. Cephalis subspherical, with a very stout, pyramidal horn of twice the length, the edges of which are spirally convoluted. Outer coronal of the peristome with twelve to fifteen short, divergent feet, inner with as many convergent, longer feet. Dimensions Length of the three joints, a 0.04, b 0.05, c 0.06; breadth a 0.04, b 0.1, c 0.12