Morocco 2015 "Rocks and Fossils of Morocco" 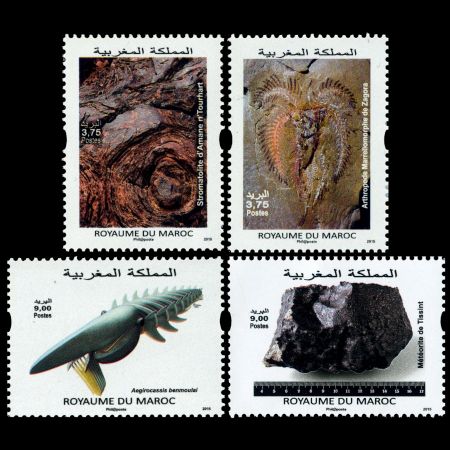 On the occasion of the international conference "RALI 2015- The Rise of Animal Life", which took place in Marrakesh between October 5 and October 10 2015, organized under the High Patronage of His Majesty King Mohamed VI, the Cadi Ayyad University, under the themes of the Cambrian Explosion and Great biodiversification Cambrian and the Promotion of the Geological Heritage, Barid Al-Maghrib ,Post Authority of Morocco issued a set of 4 stamps "Rocks and Fossils of Morocco" on October 9, 2015
.
The formal theme of the meeting are devoted to ‘Cambrian and Ordovician radiations’. In conjunction with the conference, a special symposium dedicated to aspects of Geological Heritage was held and highlight associated educational, cultural and socio-economic issues. The scientific sessions are followed by a field trip as a ‘Geotraverse of Central High Atlas and Anti- Atlas’. This field trip offered participants the opportunity to visit fossil localities near Zagora, where the Fezouata Biota is currently being studied by an international team of scientists. In the Ternata plain (N. of Zagora), the Lower Ordovician succession (Fezouata Shale and Zini Sandstones) lies unconformably over the middle Cambrian Tabanite Group. The Fezouata Shale corresponds to a thick monotonous series (1000 m) of siltstones deposited under shallow offshore conditions (storm-wave influence). The Fezouata Biota provides a unique insight into one of the most critical periods in the evolution of marine life: the Cambrian-Ordovician transition.

The following fossils and mineral are depicting on stamps: 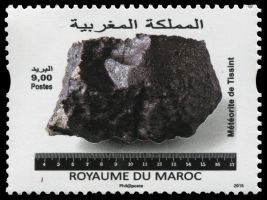 The last stamp of the set shows the Tissint Meteorite that fell in Tata Province in the Guelmim-Es Semara region of Morocco on July 18, 2011. Tissint is only the fifth Martian meteorite (A Martian meteorite is a rock that formed on the planet Mars and was then ejected from Mars by the impact of an asteroid or comet, and finally landed on the Earth) that people have witnessed falling to Earth, the last time in 1962. Pieces of the meteorite are on display at several museums, including the Museum of Natural History of Vienna and the Natural History Museum in London.
The Tissint meteorite, a piece of Mars that crashed into Earth in July 2011, may contain proof of ancient life on the red planet, according to a new study. The researchers believe organic carbon found within the meteorite is Martian in origin and may have been created by biologic processes. Recent research estimates the Tissint meteorite was ejected from Mars about 700,000 years ago and may have been formed 400 million to 500 million years ago.