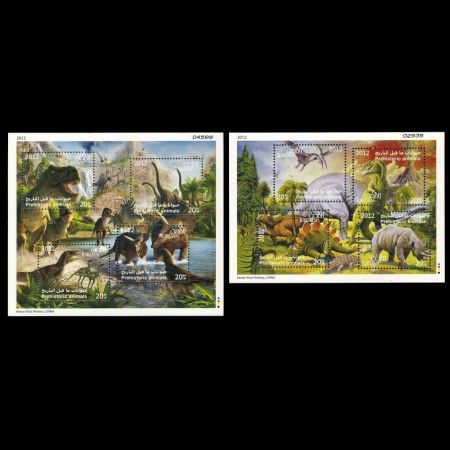 On October 18, 2013 Post Authority of Jordan launched a set of 8 stamps depicting some prehistoric animals. Stamps are issued in two mini sheets, printed by Henan Post Printing Factory in China in 2012.


The stamps shows a mix of prehistoric animals, who leaved at different geologic times at different location of the world. As far I know, any fossil of depicting animals are found in Jordan to date.

Sources of these stamps are big Wallpaper Murals.
The first is a product of Walltastic Ltd company "Dinosaur Land Wallpaper Mural 8ft x 10ft" offered in Amazon an other online-stores. Amazon's description of the Mural:
"Walltastic, the next generation of designer wallpaper murals, designed by kids for kids.
Dinosaur Land Walltastic, experience the thrill and danger amongst the dinosaurs, bring your room to life with Walltastic Dinosaur Land. Dinosaurs like you’ve never seen them before… Can you survive in the footsteps of giants?
Highly detailed, unique, computer-generated murals. Suitable for Tots to Teens. Easy to put upin 12 pieces. For kids bedrooms, Nurseries, Playrooms or Games Rooms. Walltastic is interactive and educational for your children by giving them opportunities for identifying all of the elements of the design such as animals and characters."


The origin of the second poster is a "Dinosaur Collage" available on various internet stores as posters, puzzle, wallpaper etc. Actually not all of depicting
prehistoric animals arre Dinosaurs. Pterodactyl is a flying reptilie, Arsinoitherium (right bottom corner) is an extinct genus of paenungulate mammal related to elephants. These species were rhinoceros-like herbivores that lived during the late Eocene and the early Oligocene of northern Africa from 36 to 30 million years ago - a while after all dinosaurs are disappeared from our planet. All prehistoric animals are depicting on the Collage are from pictures of famouse paleo-artist Zdenek Burian (1905-1981). Fisrt two images are just rotated, others copied as is, but painted in other colors:

Many thanks to fellow stamp collector Mihail Voronkov (Faunist) from Moscow in Russia, for his help to find some information about these stamps.