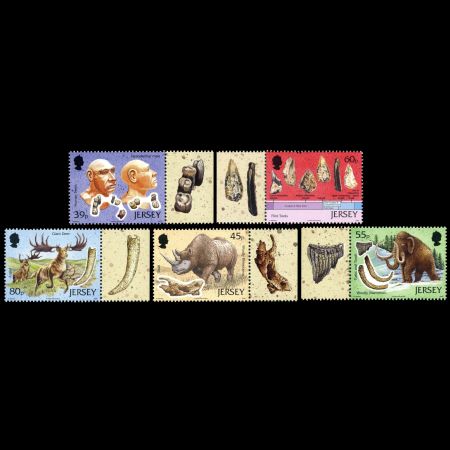 On 12th October 2010, Jersey Post has introduced a new series entitled "Jersey Archaeology". With so much emphasis on the Island's natural beauty, it is easy to bypass the fact that it is home to one of Europe's most important archaeological sites, known as La Cotte de St Brelade . Serious excavations first began 100 years ago, in 1910 and Prince Charles, himself a student of archaeology and anthropology at Cambridge University, joined in a dig at La Cotte in 1968.
The artefacts which are depicting on the stamps are some of those discovered during the various excavations and are on display at the Jersey Museum and La Hougue Bie. They are:Human Teeth, Woolly Rhinoceros skull, Woolly Mammoth Tusks & Tooth, Flint Tools,Giant Deer Antler
Dr. Paul Pettitt. senior lecturer in Palaeolithic Archaeology at Sheffield University and consultant to the BBC and independent television productions, has kindly penned the following narrative to accompany the first issue in this series: The collapsed site of La Cotte is world famous for the archaeology and palaeontology that it contained and which has been excavated in several periods from the nineteenth to the twentieth centuries. During the Ice A ge, when water was locked up at the poles as ice and sea levels were correspondingly low. Jersey became connected to the west of France. At the beginnings and ends of these cold periods, archaic humans - the Neanderthals - operated on what is now an island. At the time, La Cotte would have formed a highly-visible outcrop overlooking a coastal plain rich in the resources critical for the survival of Neanderthal hunters, such as reindeer: bison. extinct wild cattle. woolly rhinos and marnmoths. It is for these latter two animals that La Cotte is justly famous. Around a quarter of a million years ago, during a relatively mild phase of a cold glacial period. several marnmoths and woolly rhinos had fallen to their deaths from the plateau above and archaeologists are unsure whether Neanderthals deliberately drove the beasts over the edge of the plateau, or whether the animals fell accidentally. The latter seems to have happened frequently in the Ice Age with snow covering obscure fatal drops. Neanderthals would have read their landscqoes for scavenging opportunities and the fissure at La Cotte itself certainly provided a bonanza of meat. Personal risk needed to be minimised and perhaps La Cotte was a place to go when the snows were thick on the ground where dying animals could be finished off, providing crucially important nutrients and fats to ensure the survival of small groups of Neanderthals throughout the winter. Indeed. the abundance of archaeology (termed Middle Palaeolithic by archaeologists) shows that Neanderthals were farmiliar with La Cotte and probably returned to it on many occasions during their annual movements in search of food. At La Cotte, the archaeology shows Neanderthals in the process of cutting meat from the animals bodies and organising the process of butchery. Body pats were moved around the bottom of the cliff - taken to convenient places where stone tools could be used to cut them up into shareable portions. Whilst feeding Neanderthals would certainly have repaired their weapons; fragments from stone tools show that they were resharpening knives and spear tips. There is no evidence to suggest that the site was used as a camp: perhaps it was too dangerous and attracted carnivores, or perhtps coastal breezes made it somewhat unpleasant. After a few days they would probably move on, returning time and time again until the climate became too severe and the last of their kind died with the site being forgotten for millennia.