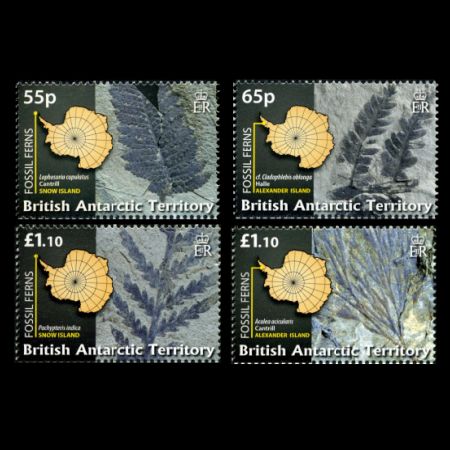 Antarctica is extremely important to the science of geology because it formed the centre of an ancient supercontinent called Gondwana which also included South America, Africa, India, Australia and New Zealand. The study of Antarctic rocks and fossils therefore helps geologists to understand the geological histories of all the southern continents.
Gondwana started to break up 180 million years ago and the separate continents drifted apart on different tectonic plates over the next 150 million years. Geologists are still uncertain exactly how the break up took place and some suggest it was caused by abnormally hot upwellings of magma, or mantle plumes from deep below the Earth's surface.

British Antarctic Survey hold an extensive collection of Antarctic Fossils and those featured on this set of postage stamps are Pteridophyta (ferns).Snow Island is part of the South Shetlands archipelago, a chain of islands extending over 500km, separated from the nearby Antarctic Peninsula by the Bransfield Strait and from South America by the Drake Passage. Both fossil ferns featured on stamps were found at President Head on Snow Island. Many important fossil finds have been made at Alexander Island, both our featured fossils were discovered at Coal Nunatak.

Go to www.antarctica.ac.uk/fossils to browse more fossils in the BAS collection.