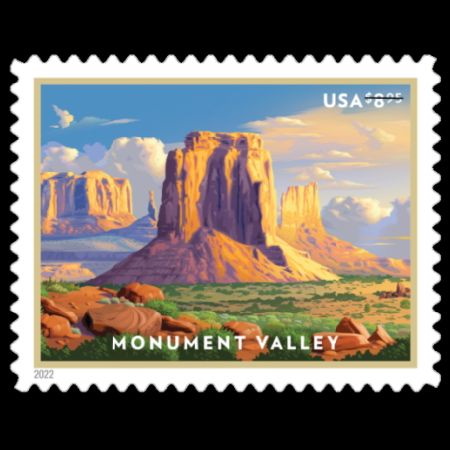 With this Priority Mail stamp, the Postal Service celebrates Monument Valley, an iconic landscape of the American West.
Reminiscent of a vintage travel poster, this stamp features artwork that emphasizes the vast stone formations of Monument Valley while highlighting the vivid colors of the sky, the earth and the area’s distinctive plant life.
Artist Dan Cosgrove created the digital illustration for the stamp based on photographs of Monument Valley, including a view facing northwest at sunrise.
Known to the Navajo as Tsé Bii' Ndzisgaii, Monument Valley is part of Monument Valley Navajo Tribal Park, which includes nearly 92,000 acres on the border of Utah and Arizona.
Although the most famous View of the valley spans only around five square miles, its spectacular vistas and rock formations are synonymous With the American West in the minds of people around the world.
Monument Valley has appeared in numerous movies, especially Westerns, and has served as the setting for countless television shows.
The valley is of great geological significance and according to the traditions of the Navajo, the stone formations in Monument Valley have sacred stories to tell.

Geologically, Monument Valley is a combination of rock layers formed during the Permian and Triassic Periods several hundred million years ago that have been subjected to differential erosion (by which hard rocks erode more slowly than soft rocks). The results can be quite complex and stunningly beautiful.
The first time Permian vertebrae remains of prehistoric animals who lived on the territory of Monument Valley more than 300 million years ago, were reported in 1936.
These fossils were discovered in the Halgaito Shale near the San Juan River shortly west of the Honaker Trail, and in the Organ Rock Shale both north of and southeast of Train Rock.
Later one, fossils were discovered in many other parts of Monument Valley: along Lime Creek, the Valley of the Gods, Johns Canyon, the general area southeast of Monument Pass and more.
Teeths of the ubiquitous freshwater sharks of Early Permian time, Xenacanthus, are common in the valley. Amphibians of both the better known labyrinthodont-kind (Eryops and Platyhystrix, for example) and the less understood lepospondylous-kind are known from the Halgaito.
Diadectes is known from several sites in the Halgaito. One of the most complete skeleton of a sail-backed Permian synapsid predator known as Dimetrodon were also found in Monument Valley (Bears Ears).


On top of fossils of many Permian animals, many of their trackways were discovered in Monument Valley too. Vertebrate trackways are abundant in the DeChelly Sandstone and are found at many localities, but large suites are exposed only where erosion has properly planed the originally leeward slopes of aeolian dunes that make up the formation. There is an excellent site just west of Tsegi-ot-sosi Canyon.