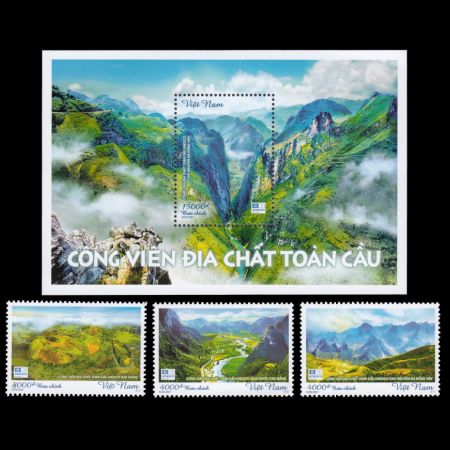 On October 30th, 2021 the Ministry of Information and Communications of Vietnam issued the stamp set "Global Geopark" including 3 stamps and a Souvenir-Sheet with 1 stamp.
Global Geoparks are parks recognized by the United Nations UNESCO program as sites with world-class geology or landscapes that are worth preserving for the enjoyment of everyone.
Geoparks recognize the scientific and educational significance of the site. They also highlight biodiversity, archaeological, historical, cultural, and societal significances of these sites.
Geoparks work with local communities to develop tourism and support services that benefit the local economy. Vietnam, has three Global Geoparks recognized by UNESCO: All three parks are famous fossil sites of Vietnam.

"Dong Van Karst Plateau Geopark" [R1]: recognized by UNESCO on October 3, 2010. It became the first Global Geopark in Vietnam, and the second one in Southeast Asia.
This Geopark is located in the northernmost mountainous region of Vietnam, with an area of 2,356.8 km2 and the average altitude is about 1,400 meters - 1,600 meters. Up to 60% of the area of this geopark is covered by karst, thus, it is the largest karst area in comparison with oth- er regions of Vietnam.
The Geopark is located in an extension of the foothills of the eastern Himalayas, where Vietnam shares a border with China in the north.
The Plateau has areas of steeply sloping limestone mountains. It is located near the Tropic of Cancer.

The geologic units found in the park range from the Cambrian (550 million years ago) to the Cenozoic.
Local geologists describe seven different stages across the region which include:
The regional center in Dong Van district includes a museum, which has a collection of regional rocks, fossils, publications about the geopark and historical antiques of local people living in the Dong Van Karst Plateau.
The Dong Van Karst Plateau is highly rated by scientists for its geoscientific values, unique in the world, with many manifestations of geoheritage that have been formed throughout the last 540 million years. 19 fossil groups have been found in the Geopark, including 500 million old trilobite.

“Non Nuoc Cao Bang Geopark” [R2]: recognized by UNESCO on April 12, 2018.
The Geopark covers more than 3,275 square kilometers located in the frontier area of Vietnam named Cao Bang, including areas of Ha Quang, Tra Linh, Quang Uyen, Trung Khanh, Ha Lang, and Phuc Hoa districts and part of Hoa An, Nguyen Binh and Thach An districts.
It is home to more than 250,000 people belonging to 9 ethnic groups of Vietnam such as Tay, Nung, H'Mong, Kinh, Dao, and San Chay ethnic groups.
In addition, it is also a rich cultural and historical land with more than 215 ranked cultural and historical relics, including 3 National Monuments, especially Tran Hung Dao Forest, Pac Bo historic site and the historic site of Border Victory in 1950.
It is one of the areas in Vietnam occupied since prehistoric time with evidence of occupation going back 20,000 years.
This region hosted the ancient capital of several feudal dynasties and was the cradle of the Vietnamese Revolution from the French war.
The western part features sedimentary rocks, pillow basalts, ultra-mafic and granitic intrusions rich in minerals and hydrothermal alterations.
The area also reveals sedimentary rocks dating back more than 500 million years, with stratotype cross-sections, and fossils indicating different paleo-environments and biosphere extinction events.
The diversity of rocks (stratigraphy, paleontology, paleoenvironment, petrology, mineralogy etc.) and landforms (tectonics, geomorphology, karst, weathering, soil erosion etc.) are evidence of the geodiversity of the area, each with its own characteristic of different evolutionary stages of the Earth’s crust.

“Dak Nong Geopark” [R3]: recognized by UNESCO on July 7, 2020.
The Geopark covers an area of 4,760 km2 with 5 districts: Krong No, Cu Jut, Dak Mil, Dak Song, Dak Glong and Gia Nghia city in Dak Nong province.
With about 65 geological and geomorphological heritage sites, including an ecosystem of nearly 50 caves with a total length of more than 10,000 meters, craters, waterfalls...
Dak Nong Geopark is popular as a rich red land with a tropical forest ecosystem preserving a diverse biota and many and many unique cultural, geological, and natural features as well as vestiges of activities of the prehistoric man.
Its history begins 140 million years ago when an ocean was covering this area. Limestone, ammonites and various fossils are the silent witnesses of this marine past.
Lava from volcanic eruptions has partially covered this land. Rich and fertile red soils have formed from the basaltic lava rocks.
Since 10,000 years ago, volcanoes were still active in this area, creating the most unique and massive volcanic cave system in Southeast Asia.
Especially, traces of prehistoric man's habitation dating back tens of thousands of years have been found in these caves.