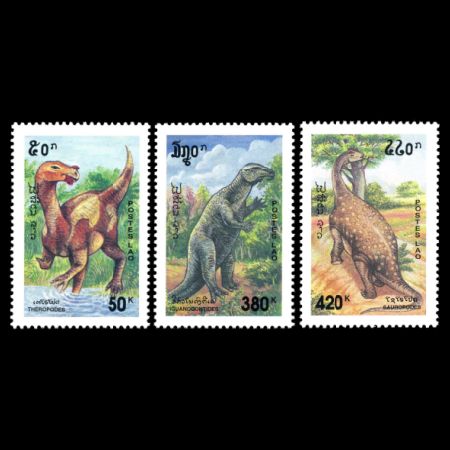 On December 8th, 1994, Post of Laos issued their third set of stamps dedicated to Prehistoric Animals.
These colorful, but very abstract, reconstructions of these dinosaurs were chosen for this set of stamps at this time. Unlike the previous two sets, this time the stamps show dinosaurs found in Mesozoic rock units of Laos.
Distinguished from the first two set, this time remains of the dinosaurs depicted on the stamps were found in the country.

The first fossils of dinosaurs were discovered in Laos in 1936 by a French geologist, Josué-Heilman HOFFET (1901-1945), pioneer of Geology and Paleontology of Laos.
During geological mapping of terrestrial formations of Bas-Laos, near the village of Tang Vay (120 km east of Savannaketh), he accidentally discovered various dinosaur fossils, as well as the remains of turtles and crocodiles.
Based on these fragmental remains that included a large femur and a small caudal vertebra, HOFFET described two new dinosaur species Titanosaurus falloti (the specimens name honors Paul Fallot, HOFFET's mentor at the University of Nancy) in 1942 and Manchurosaurus laoensis (Hadrosaur or commonly referred to as Duck-billed dinosaurs) in 1943.
In 1940, while the Japanese occupied Laos, HOFFET was mobilized and joined the intelligence services in Hue in Vietnam. He disappeared in 1945 during the fighting at the Nui Tho Pass near Hanoi, then declared as "dead for France" in 1947.

In 1990 paleontologist Philippe Taquet, then director of the National Museum of Natural History in Paris, took over the work of Josué-Heilman HOFFET. He organized several expeditions to the country and found several dinosaur deposits from the Lower Cretaceous period, Aptian-Albian age (126-100 million years ago), notably at Ban Tang Vay, Ban Nakhapong, and at Ban Viengh Hay. Paleontologists suggests that the fossil-bearing red beds of Laos are equivalent to the Khok Kruat Formation of the Khorat Group in Thailand.
These discoveries show a great resemblance between the dinosaurs of Laos and those of China, thus confirming the links between the Indochinese peninsula and the rest of Asia during the Cretaceous period.

Fossils of four different dinosaurs were found by the expedition:


As these dinosaurs were not yet well described in 1994. when the stamps were issued, similar dinosaurs from the same taxa were depicted on the stamps. The sauropod stamp has an illustration of Saltasaurus which is likely similar to Tangvayosaurus – a well known Laotian dinosaur at the time the stamps were issued.
Tangvayosaurus (meaning "Tang Vay lizard") is a genus of sauropod dinosaur from the Aptian-Albian age Early Cretaceous period from the Grès supérieurs Formation of Savannakhet, Laos.
It was a primitive or basal herbivorous dinosaur that is classified as part of the Titanosaurs. The Titanosaurs were a group that included some of the largest dinosaurs who ever roamed the Earth. Tangvayosaurus was about 15 meters long and weighted 15 tons in weight in life. Unfortunately, this species is only known from the fragmented remains of 2 or 3 individuals.
It was about 15 meter long, 15 tones weight and is known from the fragmental remains of two or three individuals.

As it is described from singles bones only, the exact placement of Tangvayosaurus is debated. The most recent classification tentatively retains this genus, because it is sufficiently different from a sauropod from next door in Thailand, Phuwiangosaurus. Phuwiangosaurus was depicted on a 1997 stamp from Thailand.


As one of the first scientifically well-known dinosaurs, Iguanodon has occupied a notable place in the public's perception of dinosaurs, its artistic representation changing significantly in response to new interpretations of its remains.

Iguanodon, right after it was described in 1825, was portrayed as a quadrupedal horn-nosed beast.
Since 1882, after the largest find of Iguanodon remains in a coal mine at Bernissart in Belgium, Iguanodon was portrayed as a bipedal dinosaur standing by a tree and eating.

During his re-examination of Iguanodon, in 1980, Dr. David Norman, who also wrote "The Illustrated Encyclopedia of Dinosaurs" book, that inspired the stamp designer, was able to show that this posture was unlikely, because the long tail was stiffened with ossified tendons. Since then it is accepted to portrayed Iguanodon as quadrupedal dinosaur. However, long after 1980 Iguanodon was still depicted in many books and postage stamps, in old style, staying or walking on two legs.
Very well preserved remains of Theropod dinosaur, partial skeleton without the skull or limbs, found in Laos in 2010 and 2014.

Ichthyovenator (meaning "Fish Hunter") is a genus of spinosaurid dinosaur from the Aptian-Albian age Early Cretaceous period (125 and 113 million years ago), from Gres superieurs Formation of Savannakhet, Laos.
This specimen became the holotype of the new genus and species Ichthyovenator laosensis, and was described by palaeontologist Ronan Allain and colleagues in 2012. The specimen name refers to the provenance from Laos.
The estimated size of the dinosaur is 8.5 - 10.5 meters long and weigth of 2.5 tones. Like others dinosaurs of Spinosaurid family, Ichthyovenator had tall neural spines that formed a sail on its back. The unique feature of Ichthyovenator is sinusoidal (wave-like) sail shape that curved downwards and divided into two separate sails.

As identified by the fellow collector Ton van Eijden, who run another website about prehistoric life on stamps: stampedout.nl, these stamp designs are based on illustrations of the famous paleo-artist John Sibbick: Segnosaurus, Muttaburrasaurus, and Saltasaurus, published in "The Illustrated Encyclopedia of Dinosaurs" book of David Norman in 1988.

Nothing, even FDC, is known