Dinosaurs and other prehistoric animals on stamps and postmarks of Laos

Contents:
Laos, officially the Lao People's Democratic Republic, or commonly referred to by its colloquial name of Muang Lao is a landlocked country in the heart of the Indochinese peninsula of Mainland Southeast Asia, bordered by Myanmar (Burma) and China to the northwest, Vietnam to the east, Cambodia to the south, and Thailand to the west.
Laos traces its history to the Kingdom of Lan Xang or Land of a Million Elephants, which existed from the 14th to the 18th century.
In 1893, it became a French protectorate, with the three territories uniting to form what is now known as Laos. It briefly gained independence in 1945 after the Japanese occupation ended, but returned to French rule until it was granted autonomy in 1949. Laos became independent in 1953, with a constitutional monarchy under Sisavang Vong. Shortly after independence, a long civil war overthrew the monarchy, when the Communist Pathet Lao movement came to power in 1975. [R1]

The first stamps of Laos were issued on 13 November 1951. Before then stamps of French Indo-China were used.
Laotian stamps were printed by multiple companies from different countries as Laos’s political situation changed. Therefore, there are many varieties of printing techniques used and many stamp designs exist, as each publisher used different equipment and design styles.
According to Stanley Gibbons catalog, stamps of Laos were printed in the following countries: Even though the first fossils of Dinosaurs were found in Laos in 1936 by French scientist, Joshua-Heilmann HOFFET, pioneer of Geology and Paleontology of Laos, Dinosaurs appear for the first time on Laos's stamps in 1988. [R2]

Official stamps of Laos related to Paleontology: dinosaurs and other prehistoric animals


Notes:
[1] This series was presented as part of "JUVALUX 88", 9th Youth Stamp Exhibition Stamp Luxembourg (29 March-4 April 1988).
All images are based on illustrations of famous Czech paleo-artist Zdenek Burian.
Phororhacus is misnamed Phororhacos.
The names Tyrannosaurus and Trachodon are swapped on stamps with face value of 50k and 3k. The Trachodon stamp from 1995 spelled correctly.
The original painting by Burian is reproduced below: 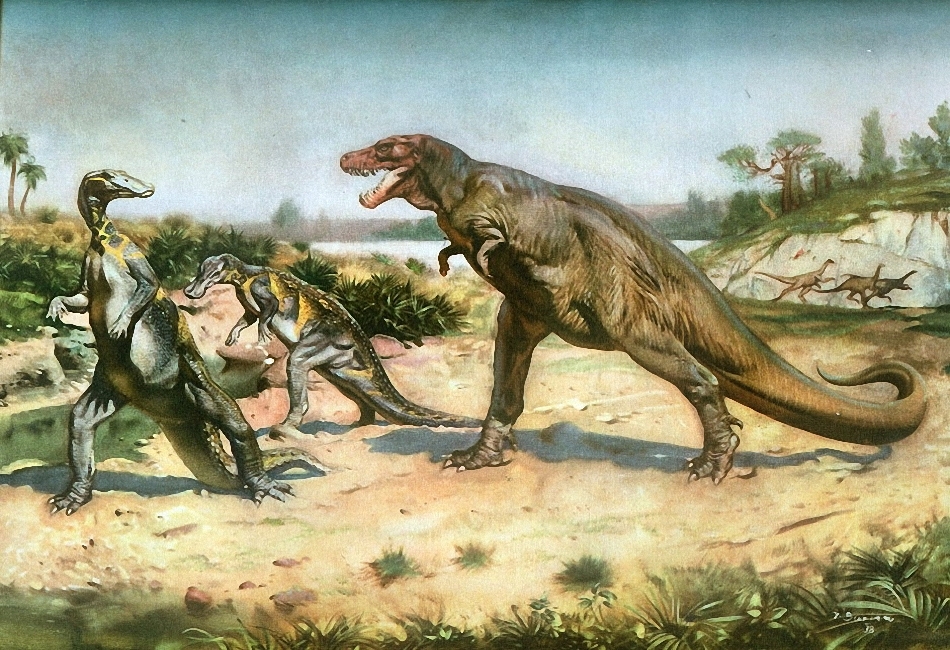 [2] Many stamps of prehistoric animals from 1960s to 1990s were based on illustrations of the famous Czechoslovakian paleoartist Zdenek Burian.
The following stamps depict the dinosaurs Iguanodon and Tyrannosaurus from the set of "Baconao National Park I", Cuba 1985 and "Dinosaurs", Laos 1988 that look almost identical.
Tyrannosaurus on the stamp of Laos, misnamed Trachodon.
[3] In this series, the names of the animals are printed in Latin and Spanish because the company that printed them was based in Cuba.

Commemorative postmarks of Laos related to Paleontology: dinosaurs and other prehistoric animals