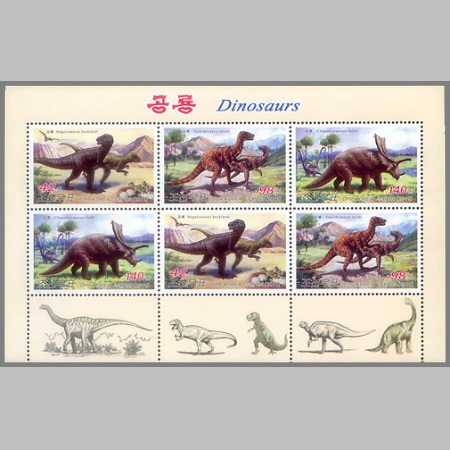 On September 5th, 2011, Post Authority of North Korea issued as et of three dinosaur stamps. These stamps issued as a booklet and Mini-Sheet of two sets. Some more dinosaurs are depicting on margin on the bottom side if the sheet. Similar products are available with imperforated stamps too.

Fossil of non of these Dinosaurs are unearthed in North Korea.
Megalosaurus is a genus large meat-eating theropod dinosaurs the middle Jurassic period from southern England
Staurikosaurus s a genus of dinosaur from the Late Triassic of Brazil, found in the Santa Maria Formation of Paleorrota Geopark.
Chasmosaurus is a genus of ceratopsid dinosaur from the Upper Cretaceous Period of North America.