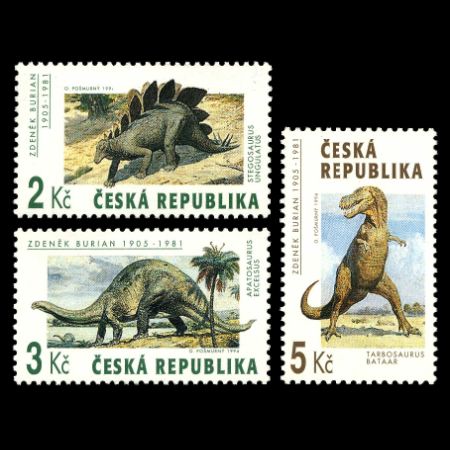 On June 1st, Post of Czech Republic issued a set of three dinosaur stamp, based on illustration of famous Czech paleo-artist Zdenek Burian.

was a Czech painter and book illustrator whose work played a central role in the development of palaeontological reconstructions during a remarkable career spanning five decades. Originally recognised only in his native Czechoslovakia, Burian's fame later spread to an international audience, and a number of artists later attempted to emulate his style. He is regarded by many as the most influential palaeo-artist of the modern era. Burian was an extremely prolific artist whose works are estimated to number between 15,000 and 20,000 paintings and drawings (pen and pencil). He illustrated over 500 books (including natural history subjects and numerous classic novels such as Robinson Crusoe, Tarzan, Plutonia) and some 600 book covers, but it is within the fields of palaeontology and palaeoanthropology that Burian's influence has been most notable. Since the late 1950s and early 1960s when Burian's work became known in the west through a series of large-format books released by the Artia publishing house, numerous scholarly and popular books on prehistoric life have featured his work, either as originals or as art based closely on them. Burian worked in initial cooperation with university palaeontologist Josef Augusta from 1938/39 (during World War II all universities in Czechoslovakia were closed due to the German occupation) and subsequently (following Augusta's death in 1968) with Zdenek pinar, painting accurate and magnificent reconstructions representing all forms of prehistoric life from many parts of the globe, from the earliest invertebrates to a vast array of fish, amphibians, reptiles, mammals and birds, as well as panoramic vistas of the landscapes in which they lived. Close to 500 prehistoric images were painted by him between the early 1930s and the late 1970s. Whilst some of Burian's earliest palaeo works depicting North American species were inspired by the pioneering American palaeo-artist Charles R. Knight (see for example, his first renditions of Stegosaurus and Brontotherium), partly because Burian lacked access to skeletal material for such reconstructions, Burian's work was less stylised and more convincing with respect to both the subjects and their landscapes, and soon became highly regarded amongst palaeontologists, especially in Europe. Previous palaeo-artists had often produced speculative works reflecting 19th century views of large dinosaurs as lethargic reptiles akin to giant lizards with sprawling limbs, but Burian convincingly painted them as active animals with parasagittal (mammal or bird-like) limb-movement and musculature.