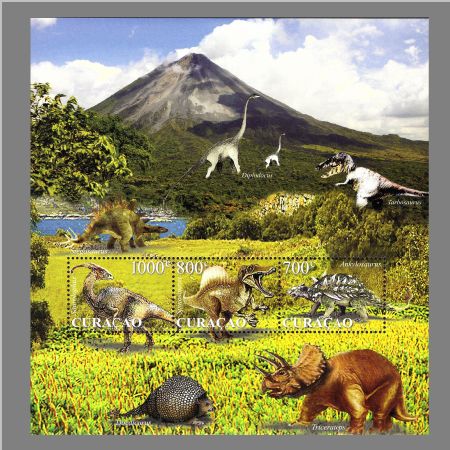 Prehistoric animals are all organisms that walked or swam, crawled, slithered, or flew on the earth moret han 5,500 years ago, before humans. Nieuwe Post with great pleasure is presenting this 3 stamps block,in honor of these creatures that represent the vast majority of extincted animals, even though no fossil remains of these giants can be found on the island, though, because at that time a 5 kilometer deep ocean marked the position of the Island to be.
1000c Stamp Saurolophus means "lizard crest", which is a genus of large hadrosaurine duckbill that lived about 69.5-68.5 milion years ago,
in the Last Cretaceous of North America (Canada) and Asia (Mongolia); it is one of the few genera of dinosaus known from muitiple continents. Saurolophus was a herbivorous dinosaur which could move about either bipedally(on two legs) or quadrupedally(on four legs). The crest of its head was hollow, and connected to the nasal passages, and thus could have been used to make sounds. Saurolophus could use these sounds in communicate within its herds, for example to warn of approaching predators.
800c Stamp Spinosaurus means "spind lizard", which is a genus of theropod dinosaur which lived in what is now North Africa, from the lower Albian to lower Cenomanian stages of the Cretaceous period, about 122 to 97 million years ago. The original remains were destroyed in World War II, but additional material has come to light in recent years. Spinosaurus may be the largest of allknown carnivorous dinosaurs. Spinosaurus is thought to have eaten fish; evidence suggests that it lived both on land and in water like modern crocodilian.

700c Stamp Ankylosaurus means "fused lizard", which is a genus of ankylosaurid dinosaur, containing one species, Ankylosaurus.magniventris. Although a complete skeleton has not been discovered and several other dinosaurs are represented by more extensive fossil material, Ankylosaurus is often considered the archetypal amored dinosaur. Other ankyloosaurids shared its well-known features, the heavity-amored body and massive bony tail club-but Ankylosaurus was the largest known member of the family.