Contents:
South Korea, officially the Republic of Korea, is a sovereign state in East Asia, constituting the southern part of the Korean Peninsula. Highly urbanized at 92%, South Koreans lead a distinctive urban lifestyle; half of them live in high-rises concentrated in the Seoul Capital Area with 25 million residents and the world's sixth leading global city with the fourth largest economy.
Korea was annexed by Imperial Japan in 1910 due to its strategic and central location, after whose surrender in 1945, it was divided into North and South Korea. A North Korean invasion led to the Korean War (1950–53). Peace has since mostly continued with the two agreeing to work peacefully for reunification and the South solidifying peace as a regional power with the world's 10th largest defence budget.
In 1987, it became a multi-party democracy with universal suffrage and is today Asia's most advanced democracy with high government transparency, universal healthcare, freedom of religion and fundamental rights protected by the most developed rule of law in East Asia. [R1]

Official stamps of South Korea related to Paleontology: Dinosaurs and other prehistoric animals


Some personalized stamps of South Korea related to Paleontology: Dinosaurs and other prehistoric animals


Some personalized postal stationeries of South Korea related to Paleontology: dinosaurs and other prehistoric animals

There are many personalized postal stationery (post cards with imprinted stamp) issued in South Korea, here are only some of them.
These post stationaries are based on standard postal stationery produced by Korea's Post Authority without any image on the left side.

Commemorative postmarks and meter frankings of South Korea: fossils and reconstruction of dinosaurs and other prehistoric animals, paleontologists

Legend is here
Notes:
[C1] The Goseong Dinosaur Museum is located in Sangjogam County Park in the center of the beautiful Sangjogam area. This museum is a tourist attraction that showcases both major dinosaur footprints as well as breath-taking scenery. It is Korea’s first dinosaur museum. 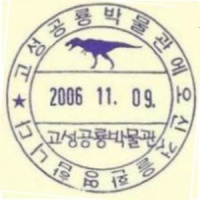 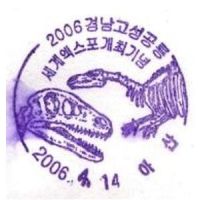 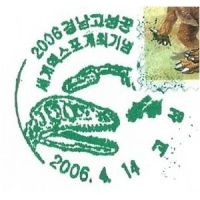 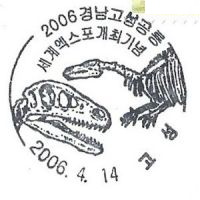 It was built next to one of the world’s largest dinosaur footprint fossil sites and opened to the public on 9 November 2004. Korean post commemorated this event with set of two dinosaur stamps and several commemorative postmarks. At least one of the postmarks was available in different colors, as shown below.
The Museum also produced a logo (not a postmark) and stamped it on empty areas of some covers. This logo looks like a postmark and likely shows an Allosuarus. Allosuarus is one of the many dinosaurs in the Museum’s collection. [R3]

[C3] Reconstruction of Neolith man at work on a stone in prehistoric park “Yeoncheon Jeongok-ri ruins”.

[C4] Uhangri Fossil site, located in Haenam County, is not only unique in the world for understanding the evolution of Mesozoic era paleontology but also highly valued academically due to the diverse shape of the strata and unusual sedimentary structures.
In addition, the discovery of two of the oldest webbed bird footprint fossils in the world along with the first pterosaur footprint fossil in Asia in the same stratum has become the first case in proving that pterosaurs and birds shared the same habitat.
It is Natural Monument No. 3894.