Charles Darwin on stamps and postmarks of Guernsey


Contents:
Guernsey is a jurisdiction within the Bailiwick of Guernsey, a Crown dependency. Situated in the English Channel off the coast of Normandy, the jurisdiction embraces not only all ten parishes on the island of Guernsey, but also the much smaller inhabited islands of Herm, Jethou and Lihou together with many small islets and rocks. The jurisdiction is not part of the United Kingdom. However, defence and most foreign relations are handled by the British Government. [R1]

The first postage stamps marked Guernsey were issued during the occupation of the island by the Germans during World War II. Later, Guernsey used British regional stamps marked specifically for use in Guernsey but valid for postage throughout the United Kingdom. Guernsey has issued its own stamps since 1 October 1969. [R2]


Some stamps of Guernsey to consider: Darwin's Discoveries 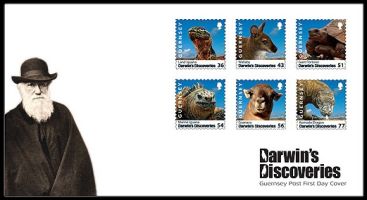 [1] Charles Robert Darwin was an English naturalist, born in Shropshire, England in 1802; his theory of natural selection and demonstration that species of life have evolved over time from common ancestors came to be widely seen as the primary explanation of the process of evolution in the 1930s, and now forms the basis of modern evolutionary theory.
These stamp issues features some of the amazing animals that Darwin encountered during his 5-year journey on board The Beagle.
On his travels Darwin came face to face with the Galapagos giant tortoise - the largest living tortoise, endemic to 9 islands of the Galapagos archipelago. Originally 14 sub-species could be found on the various islands; however, it is now thought that 3 of these sub-species are extinct.
Another animal that played a significant role in Darwin's research was the Australian marsupial the Wallaby. Members of the kangaroo clan, these herbivores have powerful hind legs, which they use to bind along at high speeds and jump great distances, coupled with a strong tail used for balance. [R3]
Charles Darwin himself appears on FDC.

Some postmarks of Guernsey to consider: Darwin's Discoveries